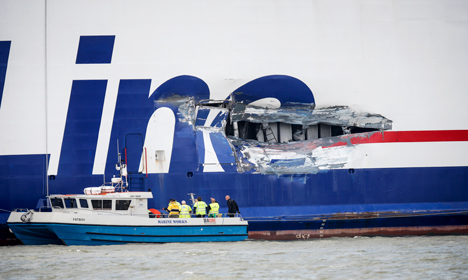 The collision resulted in a hole in the ferry's hull. Photo: TT

Passengers on the Stena Jutlandica were awoken abruptly at around 2:30am on Sunday morning when the vessel collided with a fuel tanker.

“It’s disturbning to be woken up by a crash,” one of the passengers told aftonbladet.se. “Some children started to cry and then it took a good while before we were told that another vessel had run into the stern.”

The accident happened near the island of Vinga in the waterway leading toward Gothenburg’s harbour. The ferry was on its way from Fredrikshamn, Denmark to Gothenburg. The collision left a hole in the hull, which began letting in water, but the vessel was able to make it into the harbour under its own power.

None of the approximately 600 people aboard, including passengers and crew, were injured and all were able to leave the ship, Stena Line said in a press statement.

The Swedish Coast Guard in cooperation with rescue services began a search from the air and divers went underwater to look for possible leaks in the fuel tanker.

“We are seeing how extensive the damage is and if there is a risk that leaks will develop later,” said Kalle Isaksson from the Coast Guard.

Police have launched a preliminary investigation into the incident and will see if either of the captains will face charges of negligence.

“It was the tanker that hit us, not the other way around,” he told the TT news agency.

However, he said he did not want to point to any one responsible party until the investigation had been completed.

Tryggve Möller, chairman of the board of Terntank, which operates the tanker, said he was thankful that there had been no injuries or leaks resulting from the collision.

“I think it’s too early to speculate about what happened,” he said. “We have the police and the Coast Guard who are looking into it.”