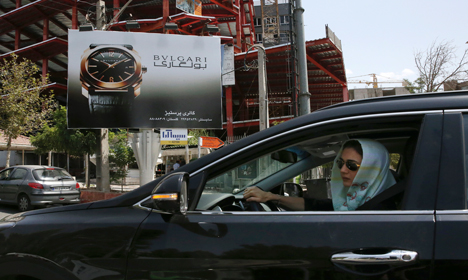 Ads for European cars and luxury goods are starting to reappear in Tehran. Photo: TT

“We are ready,” Johan Molin, president and CEO of Assa Abloy, told the TT news agency. “Among other things, we’re bought a company in Dubai that we think should be able to export safety doors to Iran.”

The company has strengthened its operations in the Middle East and on the same day the nuclear deal was reached, held a conference around the question “when are we moving in?”

Molin is not alone among Swedish bosses identifying big opportunities in the Islamic republic.

“Iran is a country with both car and oil industries, and a lot of other industrial sectors as well,” said Alrik Danielson, head of SKF, the ball bearings giant. “If all sanctions and obstacles to business disappear, it will naturally be a positive development for us.”

Swedish Economy Minister Mikael Damberg has already announced that the government will send a trade delegation to Iran in the autumn.

“Iran needs precisely the kinds of products that Swedish firms can deliver,” said Stefan Karlsson, head of the country risk analysis department at the Swedish Export Credits Guarantee Board (EKN).

He added that although the sanctions have ravaged the economy, Iran’s foreign debt is basically at zero and the foreign exchange reserve relatively large, which makes investment possible.

One of the Swedish companies which has exported to Iran during the years the sanctions were in place is Ericsson.

“We’ve had business in Iran for over 100 years,” said CEO Hans Vestberg. “Since the telecoms sector was not affected by the sanctions we don’t think the current developments will have an immediate effect on us. But of course it’s a very positive development that Iran is opening up.”

While Karlsson of EKN says that big Swedish companies have contacts with Iran that go back decades and they’ve kept them going over recent years, there are a lot of players eager to move in.

“Companies all across Europe have traditionally exported to Iran and the competition is going to be very intense,” he said.