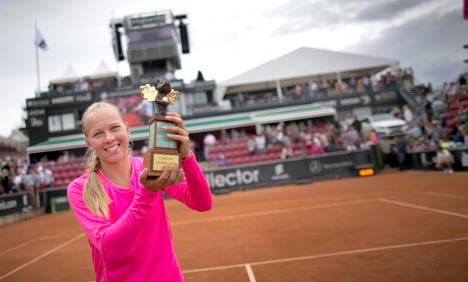 Fourth-seeded Barthel, from Germany, had beaten Larsson in straight sets in all three of their previous meetings, but this time the seventh seed made the most of home crowd support to take victory.
“It feels quite sick, I'm so happy,” Larsson said on Sunday.
“I really tried to forget that it was the final and run the ball for the ball and I managed very well,” she told Swedish broadcaster SVT.
“To take first title at home is a dream come true,” she added.
The tournament had boasted world number one Serena Williams as its top seed but the American withdrew after her opening-round win with an elbow injury.
The Swedish Open is one of the oldest global tournaments in the world and has been taking place in Båstad in southern Sweden since 1948. The coastal town attracts some 20,000 visitors each summer.
The men's competition continues this week.
Sweden has already had a successful summer of sport with Swedish tennis player Elias Ymer grabbing global attention at Wimbledon after becoming the first Swede in the men’s draw in the British tournament since Robin Söderling in 2011.
Last month the men's Under-21 football team won the European Championship in Prague, the biggest national sporting victory for the Nordic nation in decades.
Url copied to clipboard!