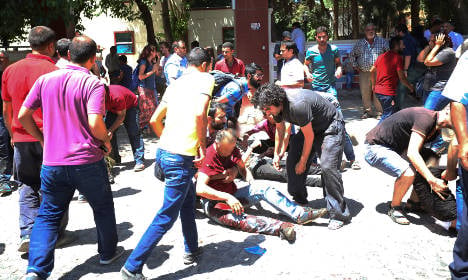 Several dozens were killed in an explosion in Turkey on Monday. Photo: AP Photo/Ozcan Soysal

Around 30 people have died and hundreds were wounded in an explosion at a cultural centre in the Turkish town of Suruc, just ten kilometres from the Syrian border on Monday.

Evin Cetin, a member of Sweden's Social Democrat party in the Dalarna region, spoke to The Local on the phone from the Suruc area. She arrived in the town four days ago with two Swedish colleagues, including Peshraw Azizi, a football player for Swedish team Dalkurd FF, to distribute aid to children affected by the war in Syria.

“We had just sent off 1,100 kilo of milk formula and had left the town today to buy more supplies. If we hadn't gone, we would have been at the cultural centre when it happened,” she said on Monday afternoon.

Hundreds of Turkish and Kurdish youths from the Federation of Socialist Youth Associations (SGDF) were staying at the Amara Culture Centre to assist in rebuilding work in the Syrian border town of Kobani when the blast happened.

They had been planning a trip to Kobani, which was secured by Syrian Kurdish forces in June following months of fighting after an assault by the Islamic State organization, also known as Isis or IS, on the town in September last year.

There had been fears of violence overspilling into Suruc, which houses many refugees who have fled the fighting. And Turkish interior ministry sources told the Reuters news agency that they believed Monday's explosion was a suicide attack by Isis.

“Our initial evidence shows that this was a suicide attack by Islamic State,” said a senior official in Ankara.

The death toll was expected to rise on Monday, officials said, as video footage showed bodies lying outside the building in the mostly Kurdish town in south-eastern Turkey.

“You feel for the people who have died. They're all people like us who want to help others and contribute to the humanitarian work. I feel afraid, frustrated, angry – there are a lot of emotions,” Cetin told The Local.

She added that she and her Swedish colleagues were now evaluating the security situation to see whether or not their aid work could continue.

“It's more important than ever that the money we have collected gets to the people who need it after these kinds of barbaric acts that Isis is responsible for,” she said.

Sweden’s Security Service has previously suggested that up to 300 people from Sweden are members of al-Qaeda groups and said that there are 150 confirmed cases of Swedes travelling to the Middle East to work alongside extremists.