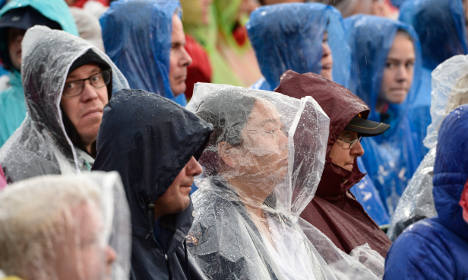 Swedes are holding out hope for a nice summer. Photo: Jonas Ekströmer/TT

After the wettest May in decades, Midsummer celebrations blighted by heavy rains and Crown Princess Victoria celebrating her 38th birthday during torrential downpours just last week, many Swedes had a hard time believing bold claims by national weather institute SMHI earlier this month stating that the month of July was hotter than average.

While the Nordic country has enjoyed some sunny days this year, there have been few prolonged periods of hot days, even in the south of the country.

This has led to near-desperate speculations about the forecast, with some Swedish papers on Tuesday choosing to go down the optimistic route by suggesting a major improvement in the weather is on the way next month.

“You have to be a bit vague,” he said about long-term forecasts, telling the TT news agency about an incident when he promised Gothenburg-based viewers 25C and sunshine – only to wake up to 15C and rain the following day.

“There's a cheeky little rule that nobody will be disappointed if the weather is better than predicted in the forecast. So you can play it safe and aim a little lower than expected. But that's no fun, I think,” he said.

However, some tourist attractions are benefiting from the grey skies. Swedish Radio's regional Gothenburg news station spoke to museum owners on Tuesday, who reported a boost in the number of visitors suddenly gaining an unexpected interest in Swedish art and history while hiding from the rain.

“Our visitor figures were very good in June,” said exhibition manager Emma Having of the Swedish Maritime Museum.

And one of the organizers behind next week's Stockholm Pride festival told The Local that she was hoping for “dull and average weather” during the annual parade.

“I'm hoping for no rain but only a little sunshine. Not amazing weather, because then people will faint at the parade, and no rain because then they won't come,” she said.

Their sentiments were echoed last week by managers of other public attractions.

“We have more visitors when there's bad weather than when the sun is shining,” Mathias Andersson, head of marketing at the Vasa Museum in Stockholm, told TT on Sunday.