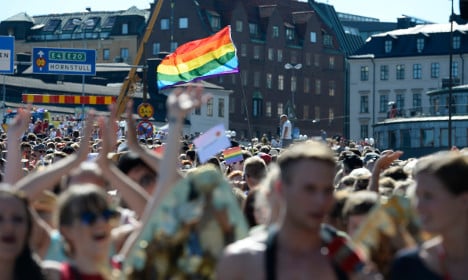 Now in its 18th year, Stockholm Pride Week is the biggest of its kind in Scandinavia and tens of thousands of Swedes are expected to descend on the capital as the celebrations kick off on Monday.

“Things are going really well and I think this year is going to be especially good. You would obviously expect me to say that, but we really have attracted a great spread of artists this year,” Stockholm Pride press officer Joanna Ljunggren told The Local on Tuesday.

A number of internationally well-known acts are to perform at the festival, including Sweden's very own Eurovision winner Måns Zelmerlöw and DJ duo Rebecca and Fiona. The keynote speech will be given by Swedish rapper Jason Diakité.

The week-long celebrations are, as usual, set to culminate in a parade through Stockholm on Saturday, August 1st. The bright, bold and glamorous march regularly attracts some 400,000 spectators lining the streets of the Swedish capital to watch 45,000 participants walk in the parade.

Ljunggren told The Local that organizers had their eyes set on an equally good turnout next week.

“I'm hoping for no rain but only a little sunshine. Not amazing weather, because then people will faint at the parade, and no rain because then they won't come. So quite simply dull, average weather,” she laughed.

WEATHER: Check the forecast for your area in Sweden

Stockholm Pride Week takes place from July 27th to August 1st. Tickets for the whole week are on offer for 800 kronor with concessions available. A special free Youth Pride event for people aged 13-29 is also set to take place alongside the main festival which has a lower age limit of 18.

“We want to make it possible for young LGBTQ people to meet others from all over Sweden and maybe make friends for life. It's a way for Pride to give something back and welcome them before they turn 18,” said Ljunggren.

IN PICTURES: Look back at last year's Stockholm Pride Week

In May this year campaign group ILGA-Europe rated Sweden the top spot in Scandinavia for lesbian, gay, bisexual, transgender and intersex people (LGBTQ). And this year has already set a new record for Pride events in the Nordic country, with more than 30 Swedish towns and cities organizing special celebrations in 2015.

Last year former leader of the Moderate party Fredrik Reinfeldt made headlines when he became the first sitting Swedish prime minister to walk in the Stockholm Pride Parade. But his successor Stefan Löfven revealed on Tuesday that he would not be following suit this year.

“He has walked in the parade before and he will do so again. But he's not attending this year for practical reasons, because he is not in Stockholm,” his press secretary Victor Harju told Swedish media.

This year only the leaders of the Green party and the Moderates have confirmed they will attend the festival, with the heads of the Left and Centre parties, the Liberals and the Christian Democrats also missing out. The leader of the nationalist Sweden Democrats is normally not invited.

“This is a year between elections. Of course we always hope for as high attendance as possible, but we're not surprised. I'm sure there are people who feel disappointed that the leaders won't be attending, but at the same time we know that the established parties are committed to LGBTQ issues,” said Ljunggren.