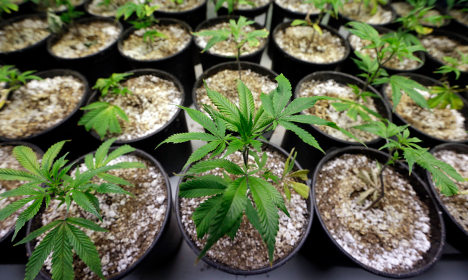 Increasing amounts of marijuana is being grown in Sweden. Photo: AP Photo/Elaine Thompson

Last week The Local reported that two men had been sent to prison after 570 cannabis plants – enough to produce around 31 kilogram of marijuana – were discovered at a disused school in Lysekil in western Sweden in a raid eight months ago.

And the incident is just one in a growing series of drugs hauls recovered in the Nordic country over the past decade.

In 2014 a total of 904 cannabis farms were reported to the police – more than quadruple the 211 reports officers received in 2004, according to the Swedish National Council for Crime Prevention (Brottsförebyggande rådet, BRÅ).

He spoke as a number of suspects in the biggest cannabis case in Swedish history were facing sentencing later on Wednesday. Some 20 people involved in the court case are accused of having set up seven marijuana factories, hiring paperless refugees to run the farms.

Organized crime is believed to be behind most drug farms in Sweden. They are usually located in deserted houses in the Swedish countryside. But not always. Raids carried out by police also regularly discover wardrobes or basements converted into mini-greenhouses.

“The larger the farm, the more organization is required. But in some cases it may just be about pure entrepreneurial spirit,” Norman told DN.

However, illegal drugs are also flooding into Sweden from abroad, with 2,398 seizures of a total of 860 kilogram of marijuana and cannabis by Swedish Customs last year. The majority entered the country via the Öresund Bridge between Sweden and Denmark.

“On the Öresund Bridge alone we carry out on average seven seizures of narcotics in 24 hours. 90 percent of those are cannabis,” Håkan Hansson of Customs' border department in Malmö told DN.

Earlier this month Malmö police called for tougher border checks on the crossing that links the southern Swedish city to Copenhagen in a bid to clamp down on illegal weapons pouring into Sweden via the Danish capital.