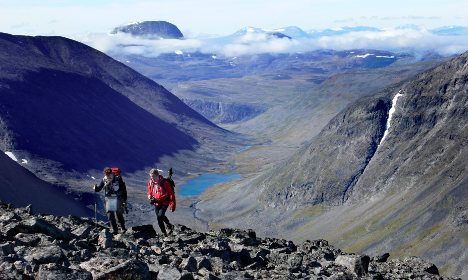 The snow-capped southern peak of the Lapland region's Kebnekaise has been battling global warming for years. First measured in 1902, it then reached 2,121 metres above sea level – but for the past two decades the 40-metre-thick glacier on top of it has been shrinking rapidly (as rapidly as a mountain shrinks) by an average of one metre a year.

The mountain is measured regularly throughout the year, but is awarded its 'official' height of 2015 at the end of August. Last year, scientists at Stockholm University predicted that the mountain's northern peak – which is solid rock and is therefore not affected by climate change – would overtake its southern neighbour as the highest spot in Sweden by the end of this year.

“That was because there was so much winter snow left, that had not yet begun to melt. And I was up at glacier level yesterday and saw that it had only melted a little. I'm sure there's more than three metres of snow left, and it's rather unlikely that it is going to melt away in a month,” Gunhild Rosqvist, head of Tarfala research station, told Swedish newswire TT.

After the wettest May in decades, Midsummer celebrations blighted by heavy rainfalls and Crown Princess Victoria celebrating her 38th birthday during torrential downpours earlier this month, Swedes have been largely unimpressed with the summer so far – despite bold claims by national weather institute SMHI stating that July was hotter than average.

But it is thanks to the disappointing beach weather that the southern peak of Kebnekaise is likely to remain the tallest spot in the Nordic country – at least for this summer.

Easily accessible, as mountains go, the peak attracts thousands of hill walkers each year. But if you want to climb to the top of Sweden, now is the time. The day the northern peak becomes the highest, it will become all the more difficult, says Rosqvist.

“You can't really get there in the same way. Today you can, if you're more or less fit, get to the tallest peak in Sweden by yourself. But for the northern peak I think you need experienced people and equipment. It's a fairly narrow ridge that is sometimes slippery and hard to predict,” she told Swedish Radio.