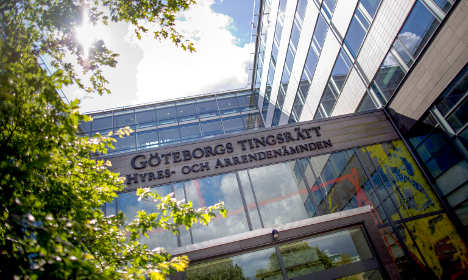 Two men in their thirties faced court on Friday after they were apprehended by police in the Gothenburg area on Thursday morning, on suspicion of committing terrorist crimes in Syria in the spring of 2013.

An arrest warrant is also being issued for a 26-year-old man who is still at large. He is suspected of assisting in committing the alleged offences.

Prosecutors claim picture material from Syria links the wheelchair-bound 32-year-old man, who was remanded in court after a hearing on Friday afternoon, to terrorist crimes in the Middle Eastern country.

However, his lawyer said that he denies all accusations.

“He denies that it is him in the pictures,” Lars Salkola told the TT newswire. “My client feels extremely poorly. He cries and insists he has nothing to do with this.”

The younger man, who also denies the allegations, was also remanded in custody on Friday afternoon.

“Getting this serious an accusation directed at oneself is hard for anyone,” his lawyer, Mia Sandros, said before the hearing.

This is the first time in Sweden that people have been arrested in an investigation into terrorist crimes during the four-year war in Syria, which has claimed more than 215,000 lives.

At least 150 Swedish residents are known to have gone to Syria or Iraq to fight for Isis or other extremist groups, according to Säpo, with intelligence suggesting that at least 35 have been killed.

“We will put forward proposals in parliament in autumn with suggestions for criminalizing the acts of organizing, recruiting and financing terror trips. Participating at training camps for terrorism, for example, is not punishable today,” Interior Minister Anders Ygeman told TT on Thursday.