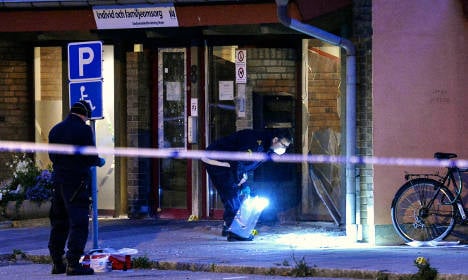 Police were called to the scene at Hålsjögatan in Malmö shortly after midnight on Friday after a grenade exploded outside a council offices building. Windows were shattered in the powerful blast which damaged several cars parked outside.

“Our forensic teams have concluded overnight that it was caused by another hand grenade,” police control room officer Peter Martinsson told Swedish Radio on Friday morning.

No one was injured in the explosion, which is the third in a series of attacks in the southern Swedish city only this week.

On Thursday several cars and homes were damaged after a hand grenade was thrown at a building in a residential area of Limhamn in western parts of the city, just two days after a blast outside a community centre destroyed two cars and injured one man.

Malmö police chief Stefan Sintéus said that he believed both Tuesday's and Thursday's attacks were linked to a case which saw three young men sentenced for their roles in a bombing in the Rosengård area – which has a reputation for violence and gang related crimes – on Christmas Eve.

“This is about a few people who are having a dispute with one another and are in a spiral of retaliation,” he told the TT news agency on Thursday.

It was not yet clear on Friday morning whether or not the night's explosion could be linked to the other attacks.

Malmö has experienced a summer of violence with numerous shootings and explosions taking place in recent weeks.

So far this year 18 incidents have led to Swedish police's national bomb squad (Nationella bombskyddet, NSB) being called in. Last year, over the whole of 2014, a total of 25 explosions took place in the city. Many of the hand grenades are believed to come from former conflict zones in the Balkans.

“This is a clear increase on previous years,” Göran Månsson, head of NSB Malmö, told regional newspaper Sydsvenskan on Friday and added that the city is the most affected in all of Scandinavia.

“Yes, I claim that it is. I have understood as much when I have met heads of other bomb protection groups in Norway, Finland and Denmark,” he said.

“They don't have the number of explosions that we have here, and I get a lot of reaction to and questions about the blasts in Malmö. Even in the rest of Europe they are very surprised at the number,” he added.