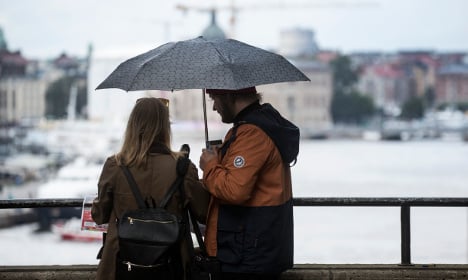 The wet weather will mainly affect southern and central Sweden but is expected to move up to the north of the country on Sunday. Photo: TT

After the wettest May in decades and a series of heavy downpours this summer, Swedes are bracing themselves for yet more rain this weekend, as the summer sun seems further away than ever.

“A really awful low pressure is coming in from the south and will bring very large amounts of rain. We expect 30-40 millimetres over the weekend, maybe even as much as 60-70,” SVT meteorologist Nils Holmqvist told the TV broadcaster.

To put this into perspective, the average level is 80 millimetres (3.15 inches) of rain for the whole of the month of July.

The low pressure is currently located over the Atlantic Ocean east of Spain and France, but is steadily moving up across Europe where it will reach Scandinavia this weekend, SVT said.

The wet weather will mainly affect southern and central Sweden but is expected to move up to the north of the country on Sunday. Holmqvist warned of a risk of flooding in basements and aquaplaning as a result of the downpours.

“This is no ordinary summer rain,” the meteorologist said.

Scattered showers are also expected in most parts of the country for the remainder of July.

The forecast follows bold claims by national weather institute SMHI earlier this month stating that the month of July was hotter than average.

But there is an end in sight, if meteorologists are still to be believed.