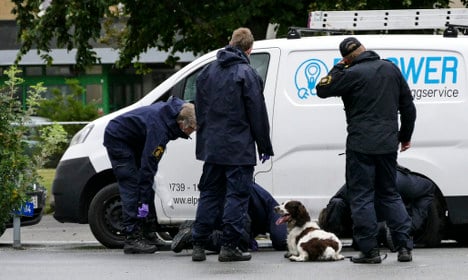 The hand grenade detonated in a car park in the Malmö district of Värnhem early on Sunday morning.

The incident, which caused damage to dozens of cars but no injuries, was different from previous blasts, according to police.

“Many of the other grenade attacks seemed to be aimed at government buildings,” a police spokesman told Swedish newspaper, Aftonbladet.

“But in the area around this detonation site there are private residences, business premises and government agencies. Therefore, the goal of the blast is unclear at present,” the spokesman concluded.

Police found part of a hand grenade at the site and bomb technicians have been on site to investigate further. The hand grenade seems to have exploded in a van, according to Swedish news agency, TT.

The police are checking the ownership of the damaged cars to see if any of the owners have links to the criminal world.

This was the fourth grenade attack of the week in Malmö. Council offices were targeted on Friday in Hålsjögatan, while on Thursday several cars and homes were damaged after a hand grenade was thrown at a building in a residential area of Limhamn in western parts of the city, just two days after a blast outside a community centre destroyed two cars and injured one man.

Malmö police chief Stefan Sintéus said that he believed both Tuesday's and Thursday's attacks were linked to a case which saw three young men sentenced for their roles in a bombing in the Rosengård area – which has a reputation for violence and gang related crimes – on Christmas Eve.

“This is about a few people who are having a dispute with one another and are in a spiral of retaliation,” he told the TT news agency on Thursday.

Yesterday Sintéus admitted that he had asked for help from the national police in an effort to stem the violence.