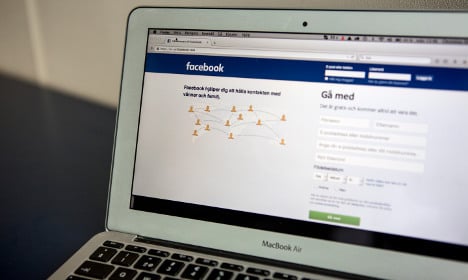 English-language users on Facebook are already able to identify themselves in a variety of ways, such as intersex, androgynous, transgender, gender fluid or transsexual.

But Swedish-language members of the social networking site have – until now – only been able to describe themselves as either male or female.

This changed on Monday, when Facebook introduced a spread of new options for their Swedish sites, allowing users to choose between 70 different gender identities such as Swedish expressions 'transkille' ('trans guy') and 'ickebinär' ('non-binary').

“It started with us having a conversation with Swedish Facebook where they said that we would be better at compiling a list with various gender alternatives. This is the first thing we do together to improve Facebook for trans people and we will keep discussing the issue,” Emelie Mire Åsell of Swedish gay and trans gender rights organization RFSL, which helped put together the list, told The Local on Monday.

Sweden's gender neutral pronoun 'hen' is now also available as an option for the first time. Users will be able to choose to be referred to as 'hen' for example when Facebook friends are prompted to “wish 'hen' a happy birthday”.

“Hen is a very important word that has grown huge and that really says something about you,” said Åsell. “People were extremely positive when we told them of this change and more than 1,000 people helped us compile the list which demonstrates the huge commitment concerning this issue.” Swedish-language users can choose between 'she', 'he' and 'hen'. Photo: Facebook screenshot

The new word stirred massive debate when it was entered into the Swedish dictionary in April this year. It had already sparked discussion – among opponents and proponents alike – in the Nordic country when a publisher decided to use it in a children's book where 'hen' replaced 'hon' (she) and 'han' (he).

But others have argued that 'hen' is not meant to replace gendered pronouns. Instead, it allows speakers to refer to a person without having to mention the gender if they don't know it, if the person is transgender, or if the information is considered irrelevant.

In May this year campaign group ILGA-Europe rated Sweden the top spot in Scandinavia for lesbian, gay, bisexual, transgender and intersex people (LGBTQ).

“Facebook is a hub for other social media which use your Facebook profile. The hope is that they will realize that they have to adapt. Facebook is such a central online space and we hope this will have a ripple effect,” said Åsell.

The change was launched to coincide with the Swedish capital's annual gay pride festival, which got under way on Monday.

In its 18th year, Stockholm Pride Week is the biggest of its kind in Scandinavia and tens of thousands of Swedes are expected to descend on the capital this week.

Organizers told The Local last week that they were hoping for an equally good turnout as last year when around 400,000 spectators lined the streets to watch some 45,000 participants walk in the parade on the festival's final day.