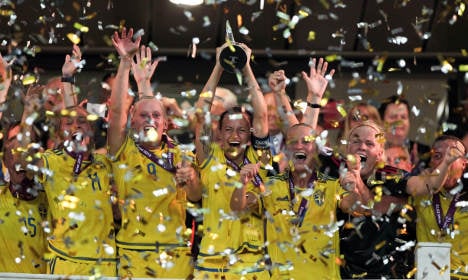 After what appeared to be a shaky start for the Scandinavian team, the championship's top scorer Stina Blackstenius stepped up to the plate, scoring two goals for her Swedish side.

“It was a fun match and it felt more or less stable, we got 1-0 and then shortly thereafter 2-0. After that it felt stable and continued to feel that way throughout the match. I was not nervous at all,” Blackstenius told Swedish public broadcaster SVT after the final. And the Spanish coach Jorge Vilda was in awe of Blackstenius and Sweden after Monday's final.

“They are a great team and they have a great player who made all the difference. It's very difficult to deal with a player like that. It's like playing against a team with Cristiano Ronaldo or Lionel Messi in it – when they're that much better than the rest it's hard to get hold of them,” he said in a statement to UEFA.

Despite Spain's Sandra Hernández heading in a 2-1 with only 10 minutes left of play, the Swedish side was never really in danger. Just a couple of minutes later Filippa Angeldal scored her second goal in the tournament, bringing the final score to 3-1 for Sweden.

“I said stamina was one of our best assets and we looked really keen out there, really keen. It was perhaps an easier game than the semi-final against Germany which had many transitions. In this game I felt we were able to rest slightly more and we were therefore in better control of this game,” Sweden coach Calle Barrling told UEFA. It is the second time Sweden beats Spain in a European final for the women's under-19 team. Malin Diaz, who today plays for the national side, sent the team to victory with the match's only goal back in 2012.

Monday's gold adds to an already successful summer for Swedish football. Earlier this month the under-21 men's team took home their first European title after a nail-biting penalty shoot-out with Portugal.