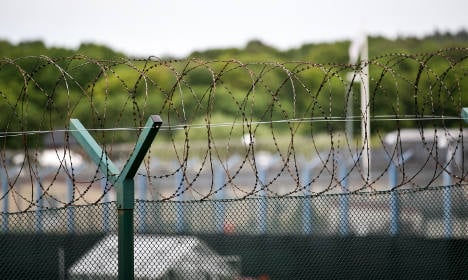 The Skogome prison where Niklas Lindgren has been kept locked up. Photo: Björn Larsson Rosvall/TT

Niklas Lindgren, known in Sweden as 'The Haga Man' ('Hagamannen'), was locked up in 2006 for raping several women in the northern town of Umeå between 1999 and 2005. In two of the cases he also tried to kill his victims.

Many in the northern Swedish town expressed fear and concern after Lindgren walked out a free man from the Skogome prison in Gothenburg on Tuesday morning. He has served two-thirds of his 14-year jail sentence.

“I remember what it was like when he was active. It was horrible. Think of all the victims who may run into him in the street,” Umeå resident Thomas Aghester told Swedish tabloid Aftonbladet on Tuesday.

Earlier in July an appeals court tore up a decision by the Swedish Prison and Probation Service – which supervises criminals – not to allow Lindgren to return to Umeå. The committee had argued partly that the risk was too high he would reoffend, but also that Lindgren himself could be a target for retribution.

“We know of course that there is a potential threat to him. It could mean that things go so far that we have to protect him, but we're not there yet. My message is (…) that nobody should take the law into their own hands,” police spokesman Börje Öhman told Swedish newswire TT on Tuesday.

“People are worried and frightened, we understand that,” he added, but would not comment on any potential risk of reoffending.

Meanwhile, a demonstration was set to be held at a central square in Umeå on Tuesday to take a stance against violence and sexual assault. Organizers emphasized it was important not to allow the event to turn into a lynch mob against Lindgren.

“We want to highlight the seriousness of the situation and hold a minute of silence, not just for the victims of the Haga Man, but for all victims,” he told TT.

Lindgren raped five women between 1999 and 2005, causing widespread fear among residents in Umeå. He was also found guilty of trying to drown one of his victims, a 51-year-old woman, in the Umeå River in 2005 and trying to kill one of his victims in 1999.

A long and complex police investigation led to the arrest of the then 33-year-old father-of-two in March 2006. Police were able to link his DNA to a number of the rapes.