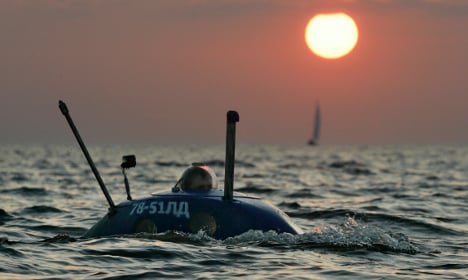 Not the Russian submarine mentioned in the article. Photo: AP Photo/Dmitry Lovetsky

Russian submarines were on Tuesday yet again top of the agenda in Sweden, just nine months after the navy's massive hunt for a foreign submarine in the Stockholm archipelago last October.

Video footage captured by a team of salvage hunters purporting to show a wrecked Russian submarine in Swedish waters immediately sparked headlines in Sweden when it was released. In Russia itself, the discovery was promptly ridiculed — mocking the Swedes' “obsession” with mystery underwater vessels.

The submarine was later found to likely be an Imperial Russian vessel which ran aground off the coast of Sweden in 1916. But before the Swedish Armed Forces confirmed this on Tuesday afternoon, The Local asked Tomas Ries, senior lecturer at the Stockholm-based Defence University, why Swedes get into such a frenzy about Russian submarines? Why are Swedes so obsessed with Russian submarines?

It's history that matters. Sweden – and the rest of the world – woke up in shock in 1981 when another submarine ran aground off Sweden's southern coast near Karlskrona. This started an extensive hunt for submarines that lasted throughout the 1980s.

How prepared is Sweden to deal with foreign vessels?

In the 1980s, Sweden made an immense effort to boost its submarine hunting capability, including getting top equipment and so on, and became very well prepared for these types of events. Along with the incident in October last year, Sweden proves it is still on its toes when it comes to this. Discoveries like the latest one would attract attention in any country though, especially if it's a modern submarine.

Why are Swedes so scared of Russia?

It dates back to the Cold War when Soviet was a great threat. And the heritage is still there from the 1980s' intensive submarine hunting, when there was a lot that indicated that Russia was directing underwater action along the Swedish coast. That's why it's not strange that Swedes react in this way – Sweden is a small country and Russia is a large neighbour who has behaved in an extremely brazen and aggressive way lately.

How could the latest find affect Sweden-Russia relations?

In case it is a Russian submarine, the Russians should be embarrassed – but they won't be. We shouldn't speculate before we know what type of submarine this is. That said, it doesn't matter if it belongs to Russia or not – the nation has acted in an unnecessarily aggressive way lately, burning their bridges [with Sweden] as a result. Now they just need to remember that Sweden is a neighbour to be reckoned with and will react accordingly in case things get hostile.

Is there really any need for Swedes to fear Russia?

One shouldn't be afraid, but we definitely have to treat any potential security political threat very, very seriously, just because Russian president Vladimir Putin can and indeed has used military power before – not least in the Ukraine.

READ ALSO: 'If the Russians come our whole lives will change'

Interview by Elin Jönsson. The interview was conducted before the wreckage was shown to likely be a Russian submarine which ran aground off the coast of Sweden in 1916.