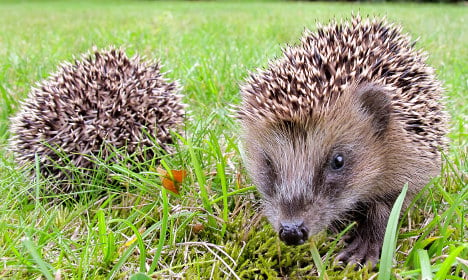 The centre suspects that at least ten of the 118 hedgehogs the centre has taken in so far this year have been hurt by people. File photo: Drago Prvulovic/Scanpix

“We are getting hedgehogs brought to us that have been hurt by children or adults,” Conny Jonasson, who works at the Kottecentralen rescue centre in Lilla Edet, told The Local.

“In some cases, they've been kicked around like a football or poked with sticks.”

The centre suspects that at least ten of the 118 hedgehogs it has cared for so far this year have been deliberately injured by humans.

However, staff say that many other hedgehogs had died before they arrived at the premises.

“I just can’t understand why people would do that to an animal,” said Jonasson. “People say that children don’t know any better, but in my opinion, they should – because a hedgehog is a living creature.”

Other hedgehogs brought to the centre have usually been injured in accidents. And not just accidents on the road.

“We also get some that have been hurt unintentionally by garden tools, such as grass trimmers and lawnmowers,” said Jonasson.

While hedgehogs are seen as pests in some countries, in Sweden they are usually treated as a nice addition to the wildlife in people's gardens, and many Swedes put out bowls of water for the animals.

Jonasson said the centre receives most of its hedgehogs in summer, when the animals, which hibernate during the winter, are at their most active.

“We have a lot of them at the moment because they mate and have babies in the summer – and if the mother gets killed, then the babies get abandoned,” he explained.

Their chances of survival have been affected by this summer's changeable weather.

“Right now, it’s pouring down with rain and some hedgehogs are getting sick. If they get a cold, they can’t use their nose to find food, which makes them even more poorly.

“Luckily, they usually recover pretty quickly and we then release them back into the wild.”

It is not the first story to emerge in Sweden this summer about the treatment of animals. Last month The Local reported that one in ten cats in the country are estimated to have been abandoned by their owners.

“They suffer. They fall ill and get injured, break their legs, lack food and get parasites,” said a senior adviser at Animal Rights Sweden (Djurens Rätt) at the time.