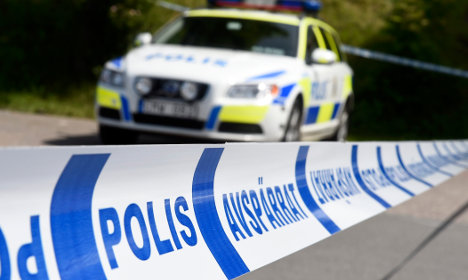 The mysterious white powder was discovered on Wednesday morning by a journalist for SVT News Blekinge in southern Sweden.

“Our morning reporter called early this morning to say that she had found an envelope in the mail box. When she opened it it was found to contain a white powder and we phoned the police,” the editor of SVT News Blekinge Martin Hult told the TT newswire.

Police set up road blocks around the offices and the national bomb squad was alerted. But after the powder was found not to be harmful officers were able to lift the cordons in the afternoon.

Forensic teams are still examining the substance to establish its exact nature, a police control room officer told The Local on Wednesday afternoon.

“The powder is considered to be harmless, but we'll have to wait and see if it is normal potato flour or if it is narcotics,” he said.

The member of staff who opened the envelope was isolated in the newsroom while she awaited news of the nature of the powder while Hult was being questioned in another room.

She was transferred to the fire and rescue services' decontamination station for closer examination in the afternoon.

The editorial team has this week received threats following the network’s coverage of a summer party organized by the leader of the far-right Sweden Democrats, Jimmie Åkesson, to which he controversially invited the Swedish rock band Ultima Thule, which has been described as a white power band.

“The phone calls and threats have come to be associated with the publications about Jimmie Åkesson and Ultima Thule,” editor Lotta Orstadius told TT.

“We are serious about this kind of thing when it happens and it is always serious when the editorial (team) is threatened,” she said. “It is a threat to democracy and journalism that we receive threats in this way. The worst that could happen is that we are silent which we will not do.”

It is as yet unclear if the threats are related to the sending of the white powder, but the police control room officer told The Local that an investigation had been launched.

“We have received a report and are investigating a potential threat against the SVT editorial office where we are examining more information from SVT concerning this letter and other threats,” he said.