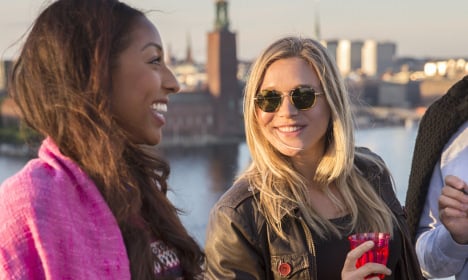 How to become a Swedish woman. Photo: Susanne Walström/imagebank.sweden.se

1. You don't expect a man to hold open a door for you

Some call it chivalry, but for many Swedish women it’s an outdated and even sexist tradition. Indeed, when a man holds open a door, he may be offending her. Why? Because of the unspoken suggestion that she's too weak to open it herself. However, in practice, most Swedish women won't bite a man's head off for daring to hold open a door (although practical Swedes that they are, they may find the gentlemanly act a tad unnecessary). 2. You're not embarrassed about getting naked in changing rooms

Swedes are known for being more liberal than other nationalities when it comes to nudity. A true Swedish woman won’t be embarrassed about stripping off in front of her female friends in the swimming pool changing rooms. She'll also happily have face-to-face discussions with friends while stark naked. Why should women feel ashamed of their bodies? Why would you not get naked in a changing room? Photo: TT

3. You can ask your boss for a raise

Or… be the boss. Sweden prides itself on gender equality in the workplace and women occupy some of the country's top managerial positions. While for many women the prospect of asking for a pay rise sends shivers down their spine, in Sweden, where the gender pay gap is one of the lowest in the world, it’s viewed as a matter of course. Sweden has many women in top company positions. Photo: Flickr

4. You pay for yourself on a date

You know you’re becoming Swedish when you think nothing of paying for your own meal on a date. Eating out can be extremely expensive – so it’s hardly fair to ask one person to cover the costs, is it? Particularly when the gender pay gap is so low. Who will reach for their wallet? Photo: Miriam Preis/imagebank.sweden.se

5. You order a pint of beer

Speaking of dates, it is also perfectly acceptable for women to order a whole pint of beer for themselves. The Local Sweden’s resident Swede says that she often gets strange looks in countries like the UK when ordering a pint instead of a half. If a woman can hold open a door for herself, then who’s to say she can’t down a pint? Anyone for beers? Why not. Photo: Simon Cocks/Flickr

6. You get naked with your in-laws

Nudity again. In many cultures, the prospect of appearing naked in front of your in-laws doesn’t even bear thinking about. But in liberal Sweden, naked saunas with friends, colleagues and even relatives of both sexes are perfectly normal. In fact, it would be a lot more bizarre if you kept your clothes on. Ever got naked in the sauna? Photo: Pontus Lundahl/SCANPIX

7. You have an impeccable sense of style

You know you’re becoming more Swedish when you wardrobe is steadily becoming more monochrome. Swedes are well-known for their simple, functional style and tend to shy away from bright colours and outlandish designs. 8. You shout at men catcalling at you on the street

Catcalling and appreciative whistles are everyday occurrences in many countries around the world – but not in gender equal Sweden. Here, any men who risk indulging in such brazen behaviour are likely to get a mouthful in return. You know you’re becoming Swedish when – far from feeling secretly flattered – you're aghast that someone could objectify you in such a way. Thinking of catcalling at her? Well, don't. Susanne Walström/imagebank.sweden.se

9. You ask men out on dates

Once again this ties in with Sweden’s legendary gender equality. In Sweden it’s just as common for a woman to initiate a relationship as for a man. Of course, it’s easier said than done and according to this expat blogger, alcohol plays an important role in Swedish relationships. Ever asked a man out on a date? Photo: Miriam Preis/imagebank.sweden.se