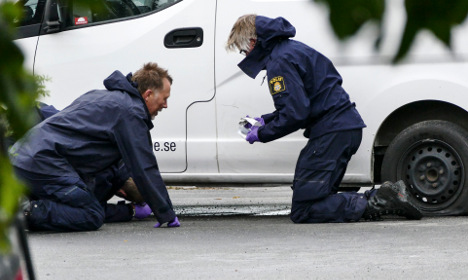 Police investigating the latest in a series of explosions in Malmö on Sunday. Photo: Johan Nilsson/TT

Malmö in southern Sweden has been rocked by a series of violent incidents in recent weeks, including numerous shootings and explosions.

A police union said on Wednesday that officers are struggling to cope with the increased number of investigations, because of staff shortages over the summer holiday season.

Most Swedes tend to claim their holidays in four-week blocks over the summer. And of the usual 705-strong Malmö force, around a third are currently off.

No substitute staff has been appointed to fill in for them, which means necessary duties are spread between remaining officers.

The heavy workload is bringing the force to its knees, the regional branch of Sweden's police union told the Sydsvenskan newspaper on Wednesday.

“Police in the investigation departments tell me that they have started to look for ways of dropping probes to be able to keep up,” said Sophia Willander.

Officials have previously said that the current wave of violence, attributed in part to the city's many gang wars, does not pose a danger to the general public. But Willander disagrees.

“It is only a matter of time before a member of the public is injured. So far it's only been down to coincidence,” she told Sydsvenskan.

In the past fortnight alone, Malmö police have had to deal with six hand grenade attacks in and around the city. Some are believed to be linked, others are thought to be separate incidents.

Last year, over the whole of 2014, a total of 25 explosions took place in the city. Many of the hand grenades are believed to come from former conflict zones in the Balkans.