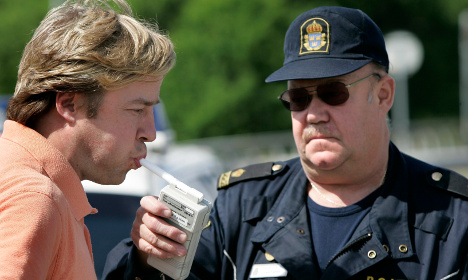 This is not the policeman or the man in the story. Photo: Anders Wiklund/Scanpix

In the post a policeman for the Sjuhärad region, identified only as Per, writes about how a right-hand drive car caught him off-guard in the early hours of Sunday morning.

“It was 5:30am and after a busy night, we were checking the sobriety in the traffic,” the post read.

“I waved the car to our control room. We said a few nice phrases to each other before I asked him to do a breathalyzer test. The man questioned directly why he should do it. I replied kindly that if they wanted to continue the journey he had to blow.”

“The man looked sincerely surprised, but smiled and was about to blow when his friend next to him said that he could blow instead. I rubbed my eyes and found out that the wheel sat on the ‘wrong’ side of the car.”

“The laughter from me and the people in the right-hand drive car was heard as far out as the Sjuhärad forests.”

“It’s hard to always be on top of things. Keep going shift workers!” the policeman concluded.

By mid-afternoon on Monday the post, which was published on Sunday afternoon, had clocked up almost 40,000 likes and almost 2.5 thousand shares.

Swedes have driven on the right-hand side of the road after legislation was passed by the Swedish parliament, the Riksdag, in 1963.

Only a handful of European countries currently drive on the left, including the UK, Ireland and Malta.

It is not known if the car in question came from abroad but tourists have certainly been flocking to Sweden this year, despite the miserable weather.

Swedish police have increased their social media presence in recent years, with several of the major police forces taking to Twitter and Facebook to share news of their activities – both big and small.

In 2013, The Local’s reporter Oliver Gee joined Sweden’s first social media police on the beat in Södermalm to find out why they have embraced Twitter.

“Swedish police aren't used to being public, so this account is really liberating,” 46-year-old Johan Säfström told The Local at the time.