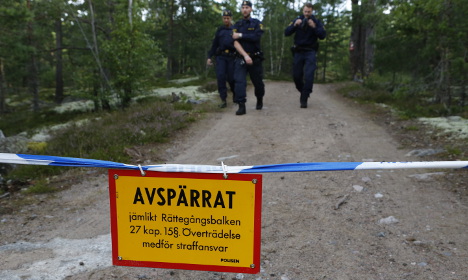 Police have now cordoned off the running track where the woman's body was found. Photo: Christine Olsson/TT

The woman was found dead at 2.05am on Thursday morning in the Runby area of the Stockholm suburb of Upplands Väsby by dog handlers.

“According to the patrol that found her everything indicates that she has been murdered. It does not look like a normal death,” Anna Kling from Stockholm police told Swedish news agency TT.

Police have now cordoned off the area.

“We are speaking to those who come to the site and have information to offer,” Towe Hägg, a spokesperson for Stockholm police told TT.

The woman’s family reported her missing at 9.30pm on Wednesday night when she didn’t come home after a short jog. The running track in Upplands Väsby where the woman was found. Photo: Christine Olsson/TT

A large number of dogs and police patrols were then sent out to look for her. The woman's family also joined the search.

The 21-year-old’s car was still parked at the exercise facility.

Two cars have now been seized, but police would not comment on whether any of the cars belonged to the deceased woman.

The place where the woman was found is just a few hundred metres into the forest near a disused nursery, according to Ingvar Fasén, who lives in the area.

He was out walking on Thursday morning when he saw the police cordons.

“I found out that a woman had been murdered there. It has not sunk in just yet,” he said.

Police launched an immediate investigation into the murder. No arrests have been made and there are no suspects.