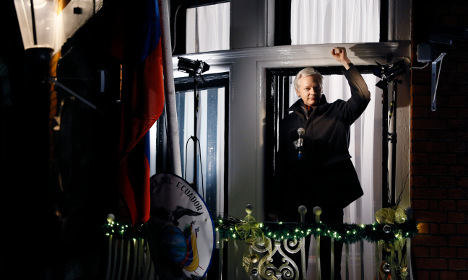 Sweden's sexual assault inquiry on Julian Assange is being pinched by time, with the statute of limitations about to expire on some of the charges and investigators unable to access Ecuador's embassy in London to question the WikiLeaks founder.

Swedish prosecutors petitioned Ecuador in June to interview Assange, who has been holed up in the embassy since 2012 to avoid extradition to Sweden on allegations of rape and sexual assault – charges Assange vehemently denies.

But access has thus far been prevented on procedural grounds, with both countries essentially blaming each other for the delay. On Friday Swedish officials criticized conditions drawn up by Ecuador for allowing the interview to take place.

“The demands are in complete violation of our principles of justice,” Cecilia Riddselius at the Ministry of Justice told the TT newswire on Friday.

“As a condition to let Assange be heard they [Ecuador] have demanded a special agreement in which Sweden recognizes asylum status for Assange. But the government cannot make such a commitment because it is the Migration Board which decides whether or not a person has the right to asylum,” she added.

Swedish prosecutors had been due to travel to London to question the 44-year-old this summer, but a scheduled visit in July was cancelled at the last minute after they said they had been struggling to get permission from the Ecuadorian embassy.

Riddselius said that Swedish prosecutors had travelled to London over the summer, but had been denied entry to the embassy because Sweden had not agreed to Ecuador's demands, which includes a promise not to extradite Assange to the US.

“Swedish legislation does not allow such a guarantee to be given in advance,” she said.

However, in an interview with The Guardian newspaper published in July, Ecuador's foreign minister Ricardo Patino accused Swedish prosecutors as well as Swedish authorities of dragging their feet on applying for permission to quiz the Australian at the embassy.

“I do not find it acceptable that (…) [having] finally decided to answer the calls during all these years to continue the case, they would expect the role of Ecuador would be limited to opening the doors of its embassy,” said Patino.

Swedish prosecutors had initially insisted that Assange travel to Sweden, but in March they finally agreed to question him in London, marking a significant U-turn in the case that had been deadlocked for nearly five years. However, according to Ecuadorian authorities they only received the first request for access, via its Stockholm embassy, on June 12th.

In any case, time is running out for Swedish prosecutors as two of the alleged offences — unlawful coercion and sexual assault — will reach their statute of limitation on August 13th and 18th. Prosecutors will still be able to charge the Australian on suspicion of rape.

“Our goal is to interrogate him as soon as possible but it is up to the authorities to approve our journey to London,” the spokesman for Sweden's Prosecution Authority told The Local last month.

The Australian has refused to travel to Sweden because he fears the country would send him to the United States, where an investigation is ongoing into WikiLeaks' release in 2010 of 500,000 classified military files on the wars in Afghanistan and Iraq and 250,000 diplomatic cables which embarrassed Washington.