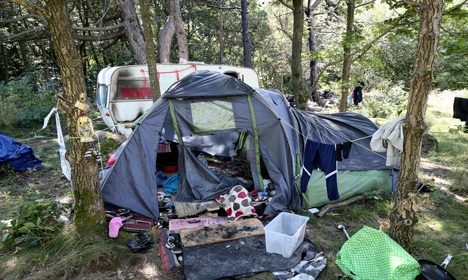 Police are searching for the man who attacked two migrants and set a tent and caravans on fire. Photo: Bjorn Larsson Rosvall/TT

“A woman reported that an unknown man, thought to have been armed with a machete, began hacking through a tent in which she was sleeping,” Thomas Fuxborg, spokesman for the police in Västra Götaland, told the TT news agency. “She was cut on her hand before the man reportedly poured a liquid on the tent and set it on fire.”

The woman’s screams woke others in the camping site. A man who came out of his caravan was attacked as well.

“He said the culprit, likely in his 30s, hit him on the head with a hammer or rod before running away from the site,” said Fuxborg.

According to police, three caravans were completely destroyed by fire and a fourth damaged. None of the victims required medical attention.

Police have found clues in the case, namely a backpack and a hammer which are being analysed.

They are now searching for the man, who is suspected of arson and two cases of serious assault.

At the time of the attacks, 11 people were at the camping site.