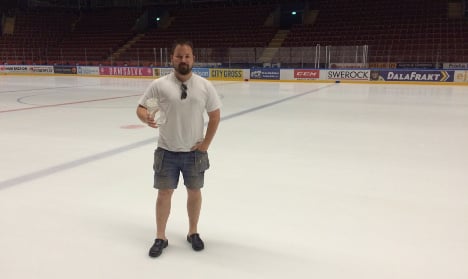 Emil Nilsén with the ice used at his daughter's christening. Photo: Private
Emil Nilsén managed to persuade both his beloved hockey club and his local church to agree to his scheme, which saw his four-month-old daughter Emma-Lisa baptized using melting ice from the Tegera Arena in Leksand in central Sweden.
"My parents met through their fandom around Leksand Superstars and I also net my wife at a hockey game, so it is a big part of my life," he told The Local on Monday afternoon, as news of the unusual christening went viral.
"I am the kind of person who likes to be creative and go outside the box. I go outside the box so much I don't even remember where the box is any more," he laughed.
"I have ADHD and I am on overdrive all the time, but it is a kind of superpower when it comes to stuff like this."

Emil Nilsén (right) at his daughter's christening. Photo: Private
Nilsén, who also paid for his daughter to become a member of the Swedish hockey side on the day she was born said the church's chaplain had initially looked at him as if he was stupid, but later agreed to the plot.
The 35-year-old who works in marketing but is currently on paternity leave took the ice from the rink himself and melted it in a bath on the morning of his little girl's baptism.
Emma-Lisa is his first child with his wife Therese, but he told Sweden's Expressen newspaper that he planned to carry out the same ritual for all of the couple's future children.
Asked by The Local what would happen if his daughter didn't turn out to be a fan of his beloved side, he said: "She is my kid so she can do whatever she wants, but I certainly hope she will continue with the family tradition."
He added: "She is coming to the opening game of the season in September…she will be five months old then and it is going to be great!". The ice used at the christening, before it was melted. Photo: Private