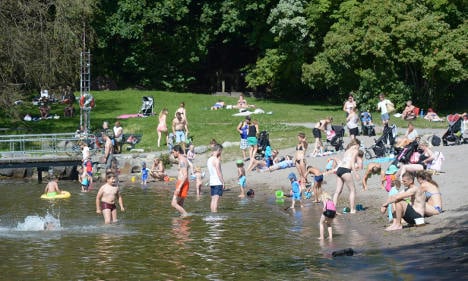 Stockholmers enjoying the sun last week. Photo: Fredrik Sandberg/TT
After a sunny weekend across much of the Nordic nation, Sweden's west coast is set to enjoy some of the hottest weather in the coming days, with Lilla Edet set to be the warmest spot in the region.
“We have high pressure on the way, so there will be great weather all week, Solbjörg Apeland, a meteorologist at weather agency Storm, told Swedish newspaper GT on Monday.
He explained that the heatwave experienced by some of Sweden's southern neighbours was set to arrive in Scandinavia in full force on Wednesday, with temperatures feeling even warmer in the west of the country thanks to very little wind.
“The air is coming from Germany and Poland. It's very hot there now, they have had record temperatures…maybe it will be up to 30 degrees here on Thursday and Friday,” he added.
In Stockholm, forecasters have predicted highs of 26C.
Sunshine is also expected throughout the week in Sweden's third largest city, Malmö, with much of northern Sweden predicted to enjoy highs of up to 23C.
FORECAST: Check the weather where you are in Sweden
But meteorologists have said that there is now little chance of the country enjoying any record temperatures.
“The days are becoming shorter and it seems as if the warm air will go east, towards Russia,” Emil Björck, a meteorologist at weather agency SMHI told the TT news agency on Sunday.
In contrast to 2014, when there was a huge heatwave, Sweden has endured weeks of rain and thunderstorms this summer, resulting in a much wetter July than normal, following the wettest May in decades.
The hottest day of the year was at the start of July, with the Swedish weather agency issuing a shortlived weather warning, calling on people to drink extra water and be on the lookout for forest fires.
This week's relatively warmer temperatures will be bittersweet for many Swedish residents, many of whom are returning to work after long summer breaks on home soil.
But with most schools remaining closed for another week or two, children are set to enjoy themselves before they have to return to lessons.
For the very latest forecast where you are, check out The Local's new weather page.
READ ALSO: How to be a cool Swede during a hot summer