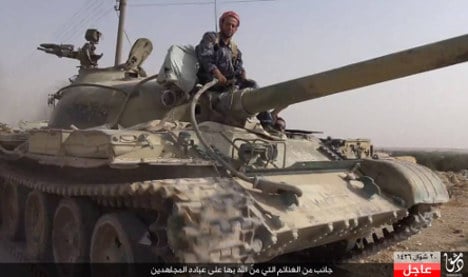 Islamic State militants pictured in Palmyra, central Syria earlier in August. Photo: Uncredited/Rased News Network/TT
The teenage girl is understood to have telephoned her parents and explained that she and the older boy were being held by Isis troops.
“It really is a critical situation,” her father – who has not been named by Swedish media – told regional newspaper Borås Tidning.
He said that the couple had married in a Muslim ceremony earlier this year and suggested that the pair had been questioned about their marriage by the extremist group because they were unable to provide any formal documentation to prove their partnership.
He said that his daughter had told him that an Isis court was now considering the case and that the pair had been asked to “swear allegiance” to the radical group in the meantime.
In Sweden, both partners need to be 18 or over to have a legally binding marriage.
No details have emerged about how the couple were captured, but according to the girl's father, she has twice been able to contact her family in southern Sweden after being secretly lent a phone from a woman in Syria.
The Swedish foreign ministry remained tight-lipped about the case, confirming only minimal details.

“We have been informed that a Swedish minor is in Syria. We are in contact with family members,” ministry spokesman Gabriel Wernstedt told the AFP news agency.
While the circumstances of the teenagers' visit to Syria remain unclear, news of their situation follows a rise in young people making the journey from Scandinavia to the Middle East to join radical groups such as Isis (also known as IS and the Islamic State).
Sweden's Security Service, Säpo, does not comment on individual cases but said earlier this year that it had reliable information suggesting that around 150 Swedes were in the region fighting alongside extremists.
Last month it revealed that between 30 and 40 of those confirmed cases were women who are mostly “involved in logistics and support activities”.
In May, Magnus Ranstorp from the Swedish Defence University told The Local that while some women and teenagers were persuaded or forced to travel to the Middle East by friends and family members, others “look up to the fighters like pop stars” and leave home of their own accord.
“For a lot of the girls this is a form of emancipation in a perverse way. They think they are getting away from the leash of patriarchal structures in their families or the areas where they live,” he said.
More than 215,000 people have been killed in Syria's four-year war, which is increasingly dominated by jihadist groups.