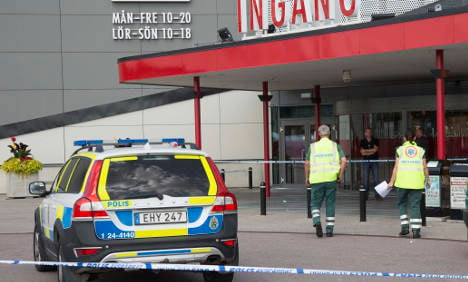 Emergency services outside the Ikea store in Västerås on Monday. Photo: Fredrik Sandberg/TT
The two victims were stabbed early on Monday afternoon at the Västerås branch of the global furniture giant, which is inside a large shopping centre.
Witnesses reported that emergency services arrived after staff screamed through the shop's intercom system that customers should leave the shop just after 1pm.
Klara Holmgren Rappu, who works as a hairdresser close to the Ikea store told Swedish broadcaster SVT that police officers had visited her salon to tell staff that “the killer was still in the building”.
“They shouted through the speakers that the premises would be vacated. Then I saw a person came out on a stretcher, paramedics ran away with one person on a stretcher,” she said.
Another witness, Sami Salim, who has a job at a restaurant at the retail park, told Swedish newswire TT: “People started screaming 'stabbing spree, stabbing spree' and only within a short time, there were several police officers there.”
A person who was originally thought to be a third, seriously injured victim turned out to be one of the two suspects, said Västerås police chief Per Ågren.
“Two men have been arrested…One is born in 1992 and the other is the third injured person, born in 1979,” Ågren told reporters on Monday night.

Police said they had no details about the motive for the attack, which took place in the store's kitchenware section.

“This is a crazy incident that has happened. We don't know the reason for it,” Ågren added.
There is no indication that the attack was terror related and Swedish intelligence agency Säpo told the AFP news agency that it had not been called in on the case.
The injured suspect was apprehended in the store and underwent surgery at a local hospital for stab wounds, Ågren told reporters.
“We don't have any information on how he sustained those wounds.” A police officer emerges from the store on Monday afternoon. Photo: TT
In an interview with regional Swedish newspaper VLT, store manager Mattias Johansson described the victims as “three seemingly ordinary visitors” and said that the violence had taken place in the store's kitchenware department.
Ikea has so far made few comments about the stabbings.
“We don't have the complete picture yet, but what we know right now is that none of our staff are among the injured. For now we're focusing on our staff members and customers and are directing all questions to the police, who are investigating at the scene,” Daniela Rogosic, a press officer for Ikea told The Local shortly after 3pm. The Ikea store where the attack happened is north west of Stockholm. Ímage: Google Maps

The Ikea branch – which is on the outskirts of Västerås about 120km north west of Stockholm – is part of a large retail complex and has more than 3000 parking spaces. It is close to Västerås airport, one of Sweden's major transport hubs, which is used by several budget European airlines including Easyjet.
Västerås is a cathedral city with a population of just over 110,000.
The Ikea store remained sealed off and surrounded by police wearing bullet proof vests on Monday evening.
Police have boosted security at other retailers in the area after the attack, to reassure shoppers.