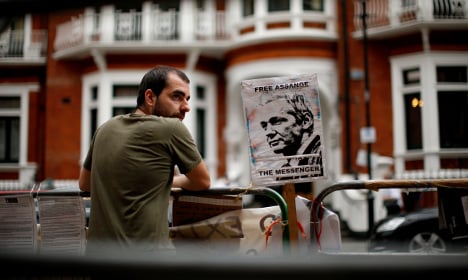 Just days before the statute of limitations is due to expire on some of the sexual offences Assange is being investigated for, Ecuador has rubbished claims by Swedish officials that prosecutors had travelled to its London embassy in June to question the Wikileaks founder.

The 44-year-old Australian has been holed up inside the Ecuadorian embassy in London since 2012 to avoid extradition to Sweden on allegations of rape and sexual assault – accusations by two women that he vehemently denies.

Swedish prosecutors have petitioned Ecuador to interview him at the embassy. But on June 16th and 17th, representatives were turned away after Ecuador failed to authorize the questioning, the Swedish prosecution authority said last week.

But on Monday the Ecuadorian embassy in London insisted in a statement that “on no occasion has any representative of the Kingdom of Sweden presented themselves at the embassy in relation to the Assange matter”.

Ecuador wants Sweden to sign a bilateral agreement on judicial cooperation regarding the Assange case before allowing Swedish prosecutors to question him on allegations of rape and sexual assault that date from 2010, Stockholm said last week.

Riddselius said Ecuador's demand “has nothing to do with Sweden's request, which is to question [Assange]”.

“Holding the interrogation does not change the fact that Assange has asylum in Ecuador,” she said.

She said the purpose of the demand was open to interpretation, but to show Stockholm's goodwill, the justice ministry has offered to sign a general agreement on judicial cooperation with the embassy.

“We are awaiting an answer,” Riddselius said.

But the Ecuadorian embassy denied her claims, saying in a statement on Monday: “At no point has the Republic of Ecuador asked the Kingdom of Sweden to grant Mr Assange asylum.”

Swedish prosecutor initially insisted Assange return to Sweden for interrogation – a condition he has rejected on fears Stockholm could deliver him to US authorities, who may try him for leaking nearly 750,000 classified military and diplomatic documents in 2010.