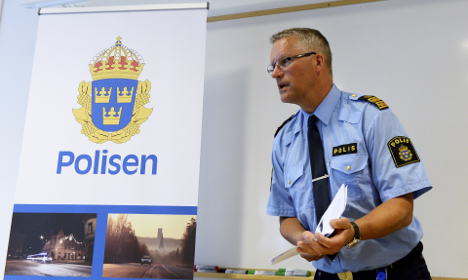 Västerås police chief Per Ågren at a press conference on Tuesday: Photo: Fredrik Sandberg/TT
Police confirmed on Tuesday morning that they had arrested two people over the violence and said that both were from Eritrea.
Officers told Swedish media that the youngest suspect, 23, had already been questioned but added that a second 35-year-old man linked to the attacks remained in hospital with life-threatening injuries.
The suspects knew one another and were living at the same accommodation complex for asylum seekers, they added.
Meanwhile police said that the shoppers who were stabbed to death at the Ikea store in the central Swedish town of Västerås on Monday were a mother and son, aged 55 and 28.
But Västerås police chief Per Ågren told reporters there were “no political overtones” in the investigation.
Deputy Chief Prosecutor Eva Moren also told Swedish media at the conference that the stabbings were unlikely to have had a political or personal motive.
“At the moment there is nothing to suggest that there is any connection between the suspects and the victims.”
She confirmed that a knife had been used in the attack and said that police had found the suspected weapon.
The 23-year-old suspect's lawyer Maria Wilhelmsson told the TT news agency on Tuesday that her client was innocent and suggested that he had simply been “in the wrong place at the wrong time”.
“He has been there [Ikea] but he didn't do anything,” she said. Västerås police chief Per Ågren. Photo: Fredrik Sandberg/TT
A press spokesperson for Ikea, Daniela Rogosic, told The Local on Tuesday morning that the company was offering counselling to staff at the branch where the violence took place and said that the store would remain closed until further notice.
“Right now our full focus is on our coworkers but of course our thoughts go to the victims and their families as well,” she said.
She said that around 300 people are employed at the Västerås Ikea, but was unable to confirm how many had been inside the building at the time of the stabbings. Police outside the shopping centre where the Västerås Ikea branch is based. Photo: Fredrik Sandberg/TT
Emergency services were called to the Ikea complex just after lunchtime on Monday.
Store workers told Swedish media that ambulances and police cars arrived after staff screamed through the shop's intercom system that customers should leave the shop.
Klara Holmgren Rappu, who works as a hairdresser close to the Ikea store told Swedish broadcaster SVT that police officers had visited her salon to tell staff that “the killer was still in the building”.
“They shouted through the speakers that the premises would be vacated. Then I saw a person came out on a stretcher, paramedics ran away with one person on a stretcher,” she said.
Another witness, Sami Salim, who has a job at a restaurant at the retail park, told Swedish newswire TT: “People started screaming 'stabbing spree, stabbing spree' and only within a short time, there were several police officers there.”
A shaky video clip filmed by a passerby that was published on the website of regional daily VLT showed police arresting one of the suspects at a bus stop outside Ikea.
“I saw police come running toward a man standing and waiting at the bus stop. The arrest happened really fast, the man didn't put up a fight but he was loud. He was maybe 30 or 40 years old,” Fredrik Pikkuaho, who filmed the clip, told VLT.
Police can be see pushing the man to the ground but the suspect's face cannot be seen clearly.
Ikea evacuated and closed the store on Monday, and it was not immediately known when it would reopen.
Västerås, an industrial city with around 110,000 inhabitants is located about 100 kilometres (60 miles) from Stockholm, is Sweden's fifth-biggest urban area.
Police have boosted security at other retailers in the area after the attack to reassure shoppers.
They have also stepped up surveillance at asylum centres across Sweden, including at the centre where the two
suspects resided in Arboga, some 50 kilometres from Västerås.