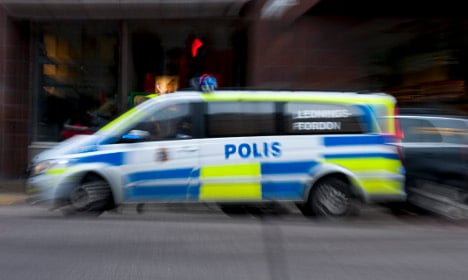 Swedish police are investigating. Photo: Bertil Ericson/TT
Emergency services were called just after 2pm on Tuesday afternoon and the victim was taken to Sahlgrenska Hospital, where doctors confirmed that he had sustained severe injuries after being shot in his face.
Police – who initially launched an assault investigation – said that they were now considering the case to be an attempted murder or manslaughter.
Some witnesses in the area reported hearing one or two shots, while others said that they had spotted three men dragging the victim along the road before driving away.
Officers said that they had found bullet shell casings in the area.
Police have not commented on whether they believe the shooting to be linked to gang crime in Sweden's second largest city, where there has been increasing violence in recent months.
In April, two men were killed in less than 24 hours in the Hisingen and Angered areas.
This took place just a month after two people died and eight others were injured following a shooting at a restaurant in the Biskopsgården suburb, which made global headlines and sparked a national debate about gun crime in Gothenburg.
In July, police charged two men with plotting to murder the main suspects in an apparent revenge attack.
Gothenburg has a long history of gang-related violence dating back to the early 1990s. Amir Rostami, a leading authority on Sweden's organized crime groups, who is based at Stockholm University told The Local earlier this year that organized crime remained a persistant problem.
“Today, the gang environment is…I don't want to exactly call it the Wild West, but something in that direction,” he said.
In June, a report by Swedish public radio programme Ekot revealed that a number of young people identified by Gothenburg authorities eight years ago as being at risk of joining gang violence have since continued to commit crimes, despite repeated interventions by Swedish social services.