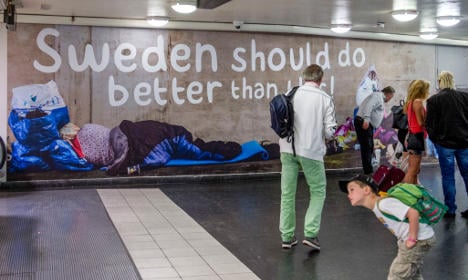 The anti-begging campaign at the Stockholm underground. Photo: Pi Frisk/SvD/TT

Public transport operator Skånetrafiken revealed that it had refused a bid by anti-immigration party the Sweden Democrats to run a controversial anti-begging campaign on the Skåne region's buses in southern Sweden.

“We say no. The advertisement copy is offensive and does not fall within the framework of our values,” Skånetrafiken traffic director Linus Eriksson told regional newspaper Sydsvenskan on Tuesday.

The proposed campaign is believed to be similar to one that sparked huge debate in Stockholm last week. Aimed at tourists, posters put up at an underground station in the capital included images of people sleeping on the streets and huge signs in English apologizing for begging in the capital.

“Sorry about the mess here in Sweden. We have a serious problem with forced begging! International gangs profit from people's desperation. Our goverment [sic] won't do what's needed,” read messages on billboards above escalators at the Östermalmstorg station before they were taken down.

According to Skånetrafiken's guidelines, advertisements may not be “perceived as racist, indecent, offensive or be difficult to reconcile with the rules that apply in society”.

Representatives of the Sweden Democrats blasted the decision on Tuesday.

“We are disappointed and think it is the wrong decision. They have not managed to motivate exactly what in our text is against their guidelines and I believe it is a decision coloured by politics, just because they find our opinions uncomfortable,” Patrik Jönsson, regional councillor for the Sweden Democrats, told The Local.

He said he would meet with other members of his party on Wednesday to discuss how to appeal.

But a spokesperson for Skånetrafiken denied that the decision was politically motivated, adding that the nationalist party had advertised with the company previously.

“We make our decisions based on the message, not the sender. We have said no to other messages in the past, for example naked women for a plastic surgery ad. We also don't allow alcohol and tobacco,” Helene Holmqvist told The Local on Tuesday afternoon.

“Our problem with this advertisement is particularly lines two and three where they talk about 'forced begging' where it conjures up an image of organized begging, implying that certain groups of people are part of this. (…) We want everyone to feel safe and welcome on board our trains and buses,” she said.

DEBATE: 'Swedes, you need to talk about immigration'

Most of the beggars in Stockholm are members of the Roma community – one of the EU's largest minority groups – and arrive as EU tourists under the right to Freedom of Movement. Many live in tents or caravans and make a living by asking people for money outside shops and underground stations. A protest against the posters in Stockholm last Tuesday. Photo: Fredrik Sandberg/TT

The Sweden Democrats scored a record number of votes in Sweden's last municipal, local and national elections in 2014 when they became the third largest political party in the country. But the party remains highly divisive in Sweden.

Stockholms Lokaltrafik (SL), which operates public transport in the capital, was heavily criticized last week for allowing the original anti-begging posters in Stockholm, which protesters described as “racist”.

“They call them [beggars] a mess like they are going to clean them away,” Amie Bramme Sey, one of the organizers behind a protest against the ads which drew some 1,000 demonstrators last week, told The Local.

On Wednesday afternoon SL confirmed that the posters had been torn down and would not be put up again for security reasons.

“It's purely a safety assessment. Yesterday a bunch of protesters came down into the underground and jumped up on the parapets at the escalators. That involves a risk, both to potential activists, but also to other travellers passing by,” a spokesman told the TT newswire at the time.