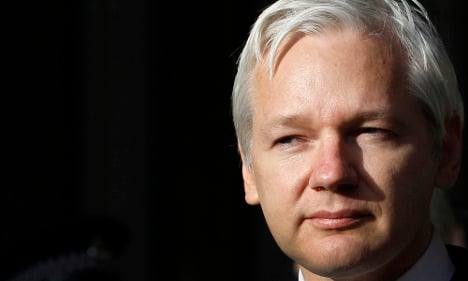 Julian Assange in London in 2011. Photo: Kirsty Wigglesworth/TT/AP
Prosecutors have got until midnight on August 13th to quiz the WikiLeaks founder on one charge of sexual molestation and another of unlawful coercion, dating back to 2010, before the charges expire under Swedish law.
But a spokesperson for the Swedish Prosecution Authority (Åklagarmyndigheten) told The Local on Wednesday that it was now “very unlikely” that anyone would be able to question him before the deadline.
Karin Rosander, director of communications, said: “Nobody has booked a flight to London. The assistant prosecutor travelled to London in June waiting for permission from Ecuador but she never got the permission, so she went back to Sweden again.”
Julian Assange, who turned 44 last month, has been holed up inside the Ecuadorian embassy in London since 2012 to avoid extradition to Sweden on allegations of rape and sexual assault. He strongly denies the accusations made by two women he met in Sweden five years ago.
Swedish prosecutors originally insisted that he travel to the Nordic country to answer to the allegations, with Assange rejecting their demands because he feared Swedish authorities could deliver him to US officials, who might try him for leaking nearly 750,000 classified military and diplomatic documents in 2010.
But in March this year chief prosecutor Marianne Ny agreed to question him in London, given the time pressures of the case. Assange's chief Swedish lawyer Per Samuelsson told The Local at the time that the U-turn was “a great victory”.
However, five months on from the announcement, the Australian-born campaigner has still not been interviewed. Ecuador's embassy in London where Assange is living. Photo: Kirsty Wigglesworth/TT
Ecuador has given a different version of Swedish prosecutors' efforts to question Julian Assange in the British capital.
The Ecuadorian embassy in London said in a statement on Monday that “on no occasion has any representative of the Kingdom of Sweden presented themselves at the embassy in relation to the Assange matter”.
Meanwhile Assange's lawyer told The Local this week that Ecuadorian authorities “did not yet have all the consent in place” in order to facilitate the Wikileaks founder's questioning in London, but said he did not blame embassy staff for delaying the case.
“It is quite clear that the prosecutor replied too late to Ecuador,” Per Samuelsson said.
“We asked for the interview in 2010 so she has had five years to do this…you can't blame Ecuador for not helping the prosecutor.”
On Tuesday, the UK-based Guardian newspaper reported that Sweden's government had agreed to hold open direct discussions with Ecuador as part of efforts to move the case forward, but noted that the olive branch had almost certainly come too late to progress the case before the expiration of two charges on Thursday.
However Samuelsson said on Wednesday that he and his team remained “prepared to be in London with just a day's notice”.
“Julian Assange wants to clear his name. He is innocent. When the prosecutor hears his version, she will understand and drop the case. We do not see it as a victory if the suspicions expire. We still want the interview to take place,” the lawyer told The Local.
A further charge of sexual molestation is set to expire under Swedish law on August 18th. But the more serious rape charge Julian Assange faces carries a 10-year statute of limitations, which means prosecutors have until 2020 to question him on the matter.
TIMELINE: Everything you need to know about the Assange case Julian Assange in Stockholm in 2010. Photo: TT
Global interest in the case remains strong, with the Swedish Prosecution Authority reporting that it has had “calls from all over the world” this week ahead of the latest crunch point.
But Rosander said that interest had waned in the Nordic nation.
“Coverage has sort of faded in Sweden. My general opinion is that it seems most Swedish journalists have lost interest in the case but I am not sure why.”
Asked if the long delay in the case had frustrated officials, she said: “That's a good question….well it has indeed been lengthy. But on the other hand a prosecutor must expect some cases to be very lengthy.”