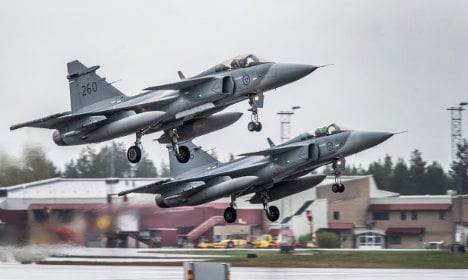 These are not the planes involved in the operation. Photo: Lars Pehrson/SvD/TT

The joint observation operation with Denmark is part of the so-called 'Treaty on Open Skies'. The 1992 international agreement was signed by 34 states – including the United States and the Russian Federation – to promote military transparency and build bridges after the Cold War.

“This is part of keeping an eye on countries around our borders,” Colonel Carol Paraniak of the Swedish Armed Forces told Swedish Radio's news programme Ekot on Wednesday morning.

Russia's own air force is set to fly over Belgium this week as part of the same international treaty. The country took part in a joint similar flight with Sweden over the United States back in 2009.

“Everything becomes public immediately this way. If it turns out that the Russians have done something that looks really strange you have the opportunity to ask questions through other channels. That is the advantage of this, that it is very much in the public eye as opposed to intelligence operations which are veiled in secrecy,” said Paraniak.

Although the surveillance mission is part of a routine international operation, relations between Russia and Sweden have been notoriously strained this past year, and the Swedish government is behind the country's decision to fly over Moscow on Wednesday.

“Russia is always of interest to Sweden and is always going to be. (…) The security political situation this particular year has changed a lot compared to last year. Tensions have increased dramatically,” said Paraniak.

Sweden's security service Säpo recently stated that the biggest intelligence threat against the Nordic nation in 2014 came from its eastern neighbour.

The revelation followed an incident in September 2014, when two SU-24 fighter-bombers allegedly entered Swedish airspace in what the former Foreign Minister Carl Bildt called “the most serious aerial incursion by the Russians” in almost a decade.

This increased Russian military activity has caused jitters in Sweden, prompting Defence Minister Peter Hultqvist to announce that Sweden would be stepping up its military power, including stationing 230 Swedish troops on Gotland from 2018 in a bid that would effectively make the island Sweden's first line of defence to the east.