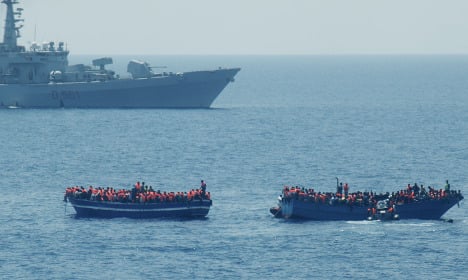 The rescue operation in the Mediterranean. Photo: Kustbevakningen

A total of 800 migrants sailing in two overcrowded wooden boats were picked up in a joint effort by the Swedish coast guard, the Italian marine corps and an Irish ship on Monday, officials revealed.

After the rescue operation had to be briefly interrupted due to poor weather conditions, the refugees were eventually brought on to the three countries' ships. They were expected to arrive ashore in Italy on Wednesday morning.

“The whole operation went well and the migrants are, under the circumstances, well and in good spirits,” read a statement from the coast guard.

Poseidon arrived in the Mediterranean in June as part of operation Triton, the EU's border rescue operation. The migrants were travelling in wooden boats. Photo: Kustbevakningen

In an interview with Swedish Radio ahead of the mission, commander Peo Allard said that the Swedes on board the ship had never undertaken a task quite like this one, which had involved both specific training and mental preparation.

The Poseidon is kitted out with special equipment in order to take on a large number of migrants. It has portable toilets and private rooms for women and children. Sails have been put up to create shade for protection from the heat.

The ship has participated in 18 different rescue operations on the Mediterranean sea and has brought 4,723 people to safety in Italy.

Sweden will participate in operation Triton until the end of August.