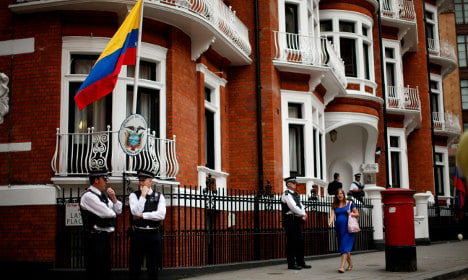 A minister at the UK's Foreign Office spoke just after Swedish prosecutors dropped parts of a sexual assault investigation as two of the four allegations against Assange expired because of the statute of limitations.

The Foreign Office in London said its ambassador in Quito, the capital of Ecuador, would make the protest on Thursday, with Minister of State Hugo Swire calling Assange's residence at its embassy in London an “abuse of diplomatic relations”.

Swedish prosecutors on Thursday dropped a sexual assault probe against Assange after two of the four allegations against the Australian — who has been holed up at the embassy since 2012 to avoid extradition — reached their statute of limitations after five years.

But they still want to question the 44-year-old over the more serious claim of rape, which has a 10-year statute of limitations and expires in 2020.

Assange is subject to a European arrest warrant and Britain has vowed to detain him if he sets foot outside the embassy, which is under police guard.

“Ecuador must recognize that its decision to harbour Mr Assange more than three years ago has prevented the proper course of justice,” Swire said in a statement.

“As a result, some of the serious sexual allegations against him will now expire. It is completely unacceptable that the British taxpayer has had to foot the bill for this abuse of diplomatic relations.”

The accusations dropped are one of sexual assault and another of unlawful coercion. A separate sexual molestation allegation will expire on August 18th.

Despire repeated attempts, Swedish prosecutors say they have been unable to gain access to Ecuador's embassy to speak to Assange.

Swire added: “I have instructed our ambassador in Quito to reiterate to Ecuador that the continuing failure to expedite the Swedish prosecutor's interview and to bring this situation to an end, is being seen as a growing stain on the country's reputation.”