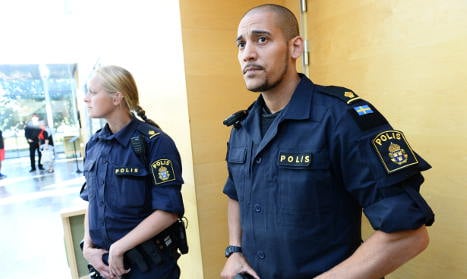 Police officers at Västmanland District Court where hearings took place on Thursday. Photo: Maja Suslin/TT
The older man had been in hospital since Monday but regained consciousness and was able to participate in his court hearing via telephone link, where he confessed to the double murder.
The prosecutor had initially asked to remand both men in custody on suspicion of murder, but on Thursday afternoon a revised request was presented, asking to have the younger man arrested only as an accomplice to murder.
Västmanland District Court decided just after 4.30pm that the 23-year-old should not remain in police custody while investigations continue. Västmanland Hospital where the 36-year-old has been since Monday. Photo: Maja Suslin/TT

Monday's attack saw a mother and her adult son stabbed to death at a store in the central town of Västerås, with police arresting the two suspects, who are both Eritrean asylum seekers, soon afterwards.

Police confirmed on Thursday that the victims came from a village just outside Skellefteå in northern Sweden and were visiting Västerås.

The Ikea store, about 100 kilometres west of Stockholm, opened for business again on Wednesday morning, less than 48 hours after the two victims were fatally stabbed on Monday lunchtime. Swedish media reports said on Wednesday that the 36-year-old suspect had been handed a deportation order which would have returned him to Italy.

The day before the attack he had met with immigration officials in Västerås to discuss his case, the reports said.

Sweden hosts a community of some 18,000 Eritrean nationals but that number is expected to rise significantly in the coming years.

Last year, some 11,500 Eritreans requested asylum in Sweden, and in the first seven months of 2015, another 4,200 have made an application making them the second largest group seeking refugee status after Syrians.