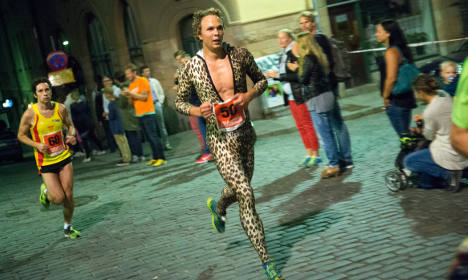 Tens of thousands of people are set to jump into their running shoes and hit the streets of Stockholm for a very unusual race on Saturday. In many ways it is much like any other long-distance run, except for one thing: it takes place in the middle of the night.

Around 37,000 runners have signed up for this year's Midnattsloppet ('The Midnight Run'), which is held on the capital's Södermalm island. The 10-kilometre run actually gets under way from Ringvägen when the clock strikes 9.20pm, rather than midnight. But in any case, remember not to make Cinderella's mistake – leave your glass heels at home and wear comfortable trainers instead. Why the long face? Here's one event you can't say 'neigh thanks' to. So quit horsing about (okay, we'll stop foaling around with these horse puns now) and head to Malmö this weekend to catch the end of Malmö City Horse Show as it culminates in an international horse trials competition.

For the non-equestrians among you, horse trials – or eventing – see riders compete against each other across three disciplines of dressage, cross-country and show jumping. Kicking off on Friday, the competition takes place on the Ribersborg beach in central Malmö and entry is completely free.

You couldn't dodge this one even if you tried. Immortalized in the 2004 film 'DodgeBall: A True Underdog Story' starring Vince Vaughn and Ben Stiller, dodgeball is that game you remember from gym class back in school – but better. The rules are simple enough: two teams throw balls at each other while trying to avoid being hit themselves.

Eight squads have signed up to compete against each other on Saturday for the chance to be named Stockholm's best dodgeball team. The tournament begins at 11am at the Björngård school in Stockholm and will be followed by an after party at the trendy Debaser Strand club (doors open at 9pm).

One of the world's biggest speedway events is heading to Sweden. The eyes of motorcycle sport fans across Europe will be on the town of Kumla in central Sweden as it revs up for hosting the Speedway European Championships on Saturday. This exciting sport sees bikers slide along a flat oval track at high speed as they turn sideways around the bends.

The races kick off at 6pm at the Ica Maxi Arena in Kumla. With world famous drivers such as Emil Sajfutinov and Nicki Pederson racing for glory on one of Sweden's best speedway tracks, it is set to be a day of excitement and action.

One of the most famous races in Sweden, Kanonloppet (literal translation: 'The Cannon Race') has attracted thousands of motor fans since it first got into gear in 1950 (15,000 people reportedly came to watch the first race). It is part of the Swedish Touring Car Championship and is one of the staple features of the Nordic country's racing calendar.

Although not as fast as Formula One, fans would argue that touring cars – with their heavily modified road-going vehicles – make for a far more entertaining sport. We will leave that up to you to decide. But to make up your own mind, head to iconic racing circuit Karlskoga Motor Stadium in central Sweden from Friday to Sunday. Entry is free.

Not in a sporty mood? Check out our interactive calendar below for plenty of relaxing events in Sweden this week.