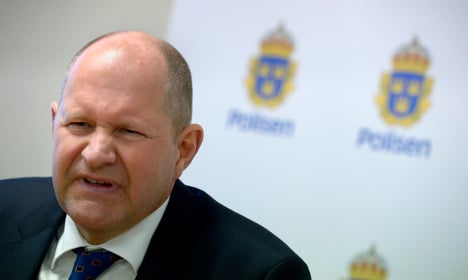 Hundreds of new officers are set to be appointed in a move to boost Malmö's police force, following a series of numerous shootings and explosions in the southern Swedish city in recent months, the national police chief revealed on a visit to the city.

“The police in the south is the prioritized area and will receive most of the new police officers in 2015 and 2016. At the moment, slightly more than 90 officers [are being appointed], in January just above 100, and in summer 2016 there will be further additional staff, but the figure has not been determined yet,” Dan Eliasson told regional newspaper Sydsvenskan.

His announcement comes just weeks after a regional police union raised concerns that police staff shortages in the city were putting the public at risk, as around a third of the 705-strong Malmö force were on holiday.

But after a meeting with regional heads of Malmö 's police force on Wednesday, Eliasson pledged to step up presence in the area.

“All of the Swedish police force's resources are available to them. We have already reinforced Malmö with staff for the acute situation, but if more is needed I am prepared to make those decisions. It could be reconnaissance resources, investigators, bomb technicians, helicopters, anything,” he told Sydsvenskan.

Just hours after his announcement officers were called to a series of car blazes across the city. A group of men were seen breaking into and setting a car on fire on Annebergsgatan south of the central Pildammarna park in the early hours of Thursday. The incident was followed by another two vehicles going up in flames in the Oxie area of the city shortly thereafter.

No arrests had been made by Thursday morning.

Malmö has been hit by a rising tide of violence this summer, including 30 explosions since the start of the year. At one point in July four grenade attacks were reported in under a week. Last year, a total of 25 blasts took place in the city over the whole of 2014.

Many of the hand grenades are believed to come from former conflict zones in the Balkans. Police have previously linked some of the unrest to an increased import of illegal weapons and recently called for tougher border controls on the Öresund bridge between Sweden and Denmark in a bid to tackle the problem.

Earlier in the summer they also revealed that they were stepping up their presence in known trouble-hit areas such as Rosengård and Seved, where they announced around 30 people believed to be from criminal backgrounds were being tracked by officers.