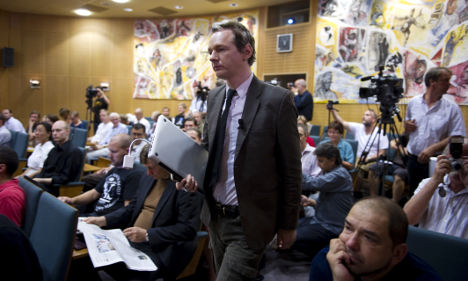 Some of the claims made against Julian Assange — who has been holed up at Ecuador's London embassy since 2012 to avoid extradition — have reached their statute of limitations after five years.

“Now that the statute of limitations has expired on certain offences, I am obliged to drop part of the investigation,” prosecutor Marianne Ny said, adding she still wanted to question the Australian on a more serious rape claim.

Prosecutors formally had until midnight on August 13th to quiz the WikiLeaks founder on one charge of sexual molestation and another of unlawful coercion, dating back to 2010, before the charges were due to expire.

Under Swedish law, if a suspect is not questioned before the deadline expires, they can no longer be tried for the alleged crimes.

Julian Assange, who turned 44 last month, strongly denies the accusations made by two women he met in Sweden five years ago.

“I have spoken to Julian…he is extremely disappointed due to the fact that he has been deprived of the opportunity to prove that he is innocent,” his chief Swedish lawyer Per Samuelsson told The Local on Thursday, just after Ny's announcement.

“She has had five years to come to London to question him.”

Swedish prosecutors originally insisted that Assange travel to the Nordic country to answer to the allegations against him, with Assange rejecting their demands because he feared Swedish authorities could deliver him to US officials, who might try him for leaking nearly 750,000 classified military and diplomatic documents in 2010.
But in March this year chief prosecutor Marianne Ny agreed to question him in London, given the time pressures of the case.
However prosecutors failed to quiz the WikiLeaks frontman, with both Ecuadorian and Swedish officials blaming one another for the delay.
Karin Rosander, director of communications, for the Swedish Prosecution Authority (Åklagarmyndigheten) told The Local on Wednesday: “The assistant prosecutor travelled to London in June waiting for permission from Ecuador but she never got the permission, so she went back to Sweden again.”
This contradicted a statement made by the Ecuadorian embassy in London on Monday, noting that “on no occasion has any representative of the Kingdom of Sweden presented themselves at the embassy in relation to the Assange matter”.
Assange's lawyer told The Local earlier this week that Ecuadorian authorities “did not yet have all the consent in place” in order to facilitate the Wikileaks founder's questioning in London, but on Thursday insisted did not blame embassy staff for delaying the case.
“It is nobody's fault but her's [the prosecutor] that the case has come to this,” said Samuelsson.
“Now this will be dropped without him having had the opportunity to tell her what really happened,” he added.
But prosecutor Marianne Ny issued a statement suggesting that the Wikileaks founder was at fault.
“Since the autumn of 2010 I have tried to interview Assange, but he has been consistently evasive,” Marianne Ny said.
Claes Borgström, a lawyer for one of the two women who accused Assange of assault in 2010, said his client was trying to come to terms with the likelihood that the case will never be tried.

“She has always been ready to stand by her accusations and wanted to bring the case to court. But at the same time a weight has been lifted. This has been dragging on for five years and she wants to go back to her normal life,” he told Swedish daily Dagens Nyheter earlier this week.