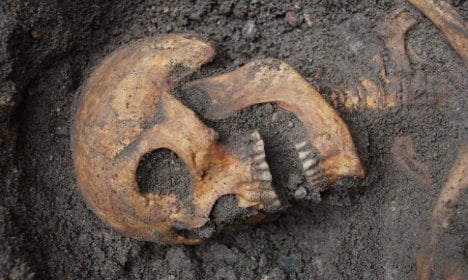 One of the skeletons found. Photo: Magnus Stibéus/Statens historiska museum
Two of the skeletons were preserved in coffins, while the others were buried in soil beneath the wall of Kalmar Castle, which is one of southern Sweden's most famous historical sites.
“I have found skeletons before so I wasn't shocked to see bodies as such, but I was surprised to see some there,” Magnus Stibéus, a spokesperson from the Swedish History Museum (Statens historiska museum), which led the excavation project, told The Local.
He said that the discovery had been made while two archaeologists were searching the area, which had been made available to them as repairs took place on the castle's walls. Kalmar Castle. Photo: Christian Alsing/Visit Kalmar
“We think we have found twelve people. At least two are children – around two or three years old – and one we think is 12 years old. We think the rest of them are men. We don't know if they are from Kalmar or somewhere else – maybe Denmark – so we will be trying to find out.”
He said it remained a mystery how the people had died, but added that his team's best guess was that they were castle staff who became sick in the late 1400s or early 1500s.
“Maybe they died by an infection caused by something…maybe the plague. We are going to try and discover more,” he said, suggesting that the bodies could have been in the area before the castle wall was rebuilt in the sixteenth century and ignored by workers at the time.
Asked why the museum had only just revealed the excavation team's discovery, which was made in March, he said: “We didn't want to say much until we had a story to tell. We had so much to analyse first and we didn't want to get anything wrong.” Some of the bones found. Photo: Magnus Stibéus/Statens historiska museum
Stibéus said that the bones should eventually go on display at the Swedish History Museum in Stockholm, but he was unable to predict when.
Kalmar Castle, built around a harbour, is more than 800 years old and is situated in Småland.
Previously a medieval fortress designed to defend the region's inhabitants against their neighbours, it was transformed into a grand castle in the sixteenth century, but was damaged by a fire in 1642 and then fell into disrepair.
At the time the people dug up this spring are understood to have died, Sweden and Denmark were still part of the Kalmar Union, a state that brought together the two Scandinavian nations along with Norway, but formally split up in 1523 when Gustav Vasa became King of Sweden.