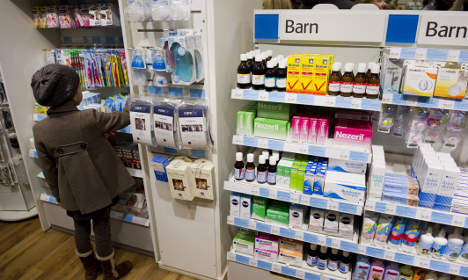 An Apoteket store in Stockholm. Photo: Henrik Montgomery/TT
Apoteket announced earlier this week that it was planning to introduce a range of plasters for people with darker skin tones as part of efforts to cut discrimination in Sweden.
But the idea quickly caused a media storm in Denmark after new foreign minister Kristian Jensen posted a link to the bandage story on Facebook alongside the comment: “I’m once again happy that I don’t live in Sweden…”.
The Danish minister for children’s affairs and education, Ellen Trane Nørby, also weighed in on the issue, comparing it to Sweden’s recent censoring of ‘racist’ elements of Pippi Longstocking stories.
“Who in the world seriously believes that Pippi’s monkey is an affront to people from other parts of the world or that white bandages and plaster are made to annoy people who have darker skin?” she wrote on Facebook.
News of the two ministers’ comments quickly made it into the Swedish press and with several high profile critics calling on Jensen to apologize.
“It is unworthy that a foreign minister should speak this way about a neighbouring country. He should apologize to the Swedish people,” Drude Dahlerup, a Danish professor of political science at Stockholm University, told Sweden's Expressen newspaper.
Read more Danish news in English on The Local Denmark
Danes and Swedes often have a very different outlook on issues surrounding race and free speech.
From Danes accusing Swedes of being stuck in a ‘spiral of silence’ on immigration issues, to Danish art projects and toy catalogues being declared racist on the other side of the Öresund and a Danish free speech group’s decision to highlight works of a Swedish artist convicted of racism, there is no shortage of examples on which the neighbouring countries fail to see eye to eye.
But Sweden's own foreign minister Margot Wallström attempted to put a bandaid over the latest row on Friday by suggesting that Jensen had crossed a line, but noting that the 44-year-old had simply made his plaster-related blunder as a result of inexperience.
“I'm thinking that he is new to the job as foreign minister. You have to forgive those kinds of transgressions. I am sure he will learn,” Wallström told the TT newswire.
Jensen also defended himself on Danish channel TV2, explaining that his comments were supposed to be “tongue in cheek” but adding: “I'm happy to live in a country where we debate more important things than the colours of a plaster.”
Apoteket, which has 370 stores across Sweden, revealed its darker plaster idea on Wednesday after talking to a number of Swedish anti-racism charities.
“We're looking at whether it's possible to have different coloured plasters…we hope to have something in place by the end of the year,” Communications Director Eva Fernvall told The Local.
The development followed criticism by Swedish blogger Paula Dahlberg who told public broadcaster Sveriges Radio on Monday that the pharmacy giant was contributing to racism by only offering shades of beige plasters on its shelves.
But Fernvall insisted that the company's decision to trial darker products was made long before the writer made the comments.