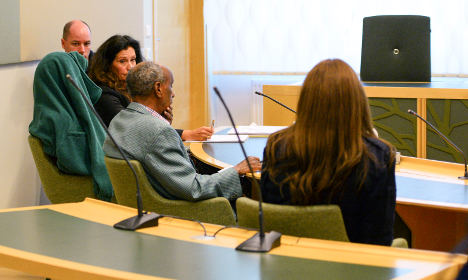 The 23-year-old suspect was released after a court hearing on Thursday. Photo: Maja Suslin/TT

Staff at the refugee centre, which is situated around 50 kilometres outside of Västerås, called the police at around 9pm on Thursday after nine men, aged 18-30, turned up outside the building. The Dagens Nyheter (DN) newspaper described them as “shouting, throwing eggs and holding placards”.

“The nine people had travelled there from Stockholm, evidently some kind of planned action. It was a crime against [laws regulating public disturbance] and the people have been identified. No arrests were made, but we made sure that they left the scene,” Ivan Åslund, regional police control room officer, told DN.

“Of course the residents get worried when things like this happen. We view it as very serious,” he added.

Police have stepped up presence at asylum centres in the Västmanland region after the two suspects linked to Monday's attack at Ikea, in which a mother and a son were stabbed to death, were revealed to be asylum seekers from Eritrea.

A court hearing on Thursday saw a 36-year-old man admitting to the double murder, while his suspected accomplice, 23, was released from custody.

The younger man's lawyer told Swedish media that she believed he would be placed under police protection after receiving several threats to his life in various online forums. Maria Wilhelmsson added that her client welcomed the court's decision, but said the case had put him under great psychological strain.

“First he becomes witness to two horrible murders. Then he is wrestled to the ground by police, has tear gas sprayed in his eyes and gets locked up in a cell. And he doesn't know the language. You don't feel particularly good after that,” she told DN after Thursday's hearing.

Monday's attack saw a mother and her adult son stabbed to death at a store in the central town of Västerås, with police arresting the two men soon afterwards.

Police confirmed on Thursday that the victims came from a village just outside Skellefteå in northern Sweden and were visiting Västerås.

The Ikea store, about 100 kilometres west of Stockholm, opened for business again on Wednesday morning, less than 48 hours after the two victims were fatally stabbed on Monday lunchtime.

The 36-year-old suspect that the older suspect, 36, had been handed a deportation order which would have returned him to Italy and had met immigration officials in Västerås to discuss his case on the day of the stabbings, the reports said.

Sweden hosts a community of some 18,000 Eritrean nationals but that number is expected to rise significantly in the coming years.

Last year, some 11,500 Eritreans requested asylum in Sweden, and in the first seven months of 2015, another 4,200 have made an application making them the second largest group seeking refugee status after Syrians.