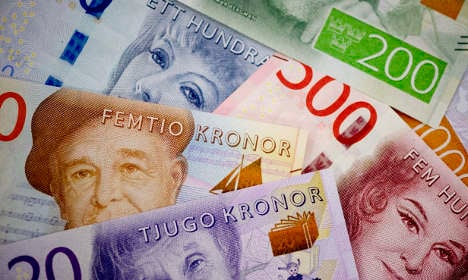 A stash of Swedish kronor like this was taken home by the man. Photo: Jessica Gow/TT
The lucky new owner of the banknotes discovered the cash inside a wrapped package which he spotted at the side of a road in an industrial area where he had gone for a stroll earlier this year.
He immediately took the cash to police in Helsingborg, the nearest city.
Under Swedish law, any lost property left unclaimed after three months can be returned to the person who handed it in and on Friday police said that the huge wad of notes had been given to the beady-eyed walker.
"We have given a sum of 730,000 kronor in bank notes to a middle-aged man. The bank notes are still valid and the entire amount is going to the person who found them. We are not taking a single kronor," police spokesperson Richard Glantz told Swedish newspaper Sydsvenskan.'
He described the case as "extremely unusual", adding that he had never before dealt with the chance discovery of such a large sum of money.
But the news comes just weeks after a separate case in which a woman who found 85,000 kronor ($9,742) in cash in a garbage room in Stockholm and handed it into police was allowed to keep the money – two and a half years after her discovery.
“She’s very pleased but of course she is quite upset that it took so long,” her lawyer Patric Lindblom told The Local.
“Normally if you bring lost property to the police you get it back after three months or the actual owner gets in touch with police,” he said.