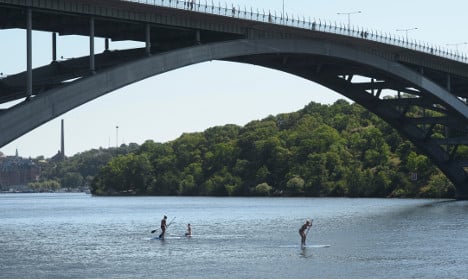 The heatwave experienced by some of Sweden's southern neighbours arrived in Scandinavia in full force this week, with temperatures feeling even warmer in the west of the country thanks to very little wind.

And the sunny weather is set to remain in central and southern parts of the Nordic country over the weekend, forecasters promised on Friday.

“We could get close to 25C in some areas,” Ibrahim al-Mausawe, meteorologist at Swedish weather institute SMHI, told the TT news agency. However, further north, temperatures are likely to drop to below 20C, he added.

Sunday is set to be sunny in most parts of Sweden, but patches of rain are slowly moving in across the country.

“There could be some precipitation on the West Coast and in Skåne [Sweden's southernmost region],” warned al-Mausawe and added that more rainfall was expected in the coming week.

FORECAST: Check the weather where you are in Sweden

In contrast to 2014, when there was a huge heatwave, Sweden has endured weeks of rain and thunderstorms this summer, resulting in a much wetter July than normal, following the wettest May in decades.

What much of the Swedish summer has looked like. Photo: Christine Olsson/TT

The hottest day of the year was at the start of July, with the Swedish weather agency issuing a shortlived weather warning, calling on people to drink extra water and be on the lookout for forest fires.

But meteorologists have said that there is now little chance of the country enjoying any record temperatures.

“The days are becoming shorter and it seems as if the warm air will go east, towards Russia,” Emil Björck, a meteorologist at SMHI, told the TT news agency on Sunday.

For the very latest forecast where you are, check out The Local's new weather page.

READ ALSO: How to be a cool Swede during a hot summer