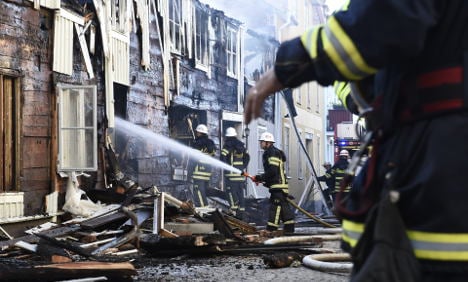 Firefighters at the scene on Sunday. Photo: Mikael Fritzon/TT

Around 15 firefighters remained at the scene on Monday morning after spending Sunday battling the huge fire which started in an attic inside an apartment and spread to adjoining properties. “It’s calmed down a bit but there may be embers. It’s blowing a bit and could take off again, so we have to stay in place,” one firefighter, Gunnar Hansson, told the TT news agency. Micael Carlson, the chief firefighter on the scene in Eksjö on Sunday. Photo: Mikael Fritzon/TT

A 25-year-old woman found in one of the burning properties on Sunday died in hospital.

More than 200 people were told to leave their homes, although most were allowed back before bedtime.

Stefan Elm, a spokesperson for Eksjö town council, told The Local that around 50 people had spent the night staying with friends or family or on camp beds in council buildings.

“Many people have offered apartments that could be available in the short term to help these people out while we help them look for something for the future,” he said. Lasse Johansson, press officer for Jönköping police, had suggested on Sunday afternoon that the entire old town could be in danger.

“They have emptied the entire county of firefighters. The entire wooden town could burn down because the fire is so bad,” he told TT, before emergency services got the blaze under control.

“We have more than 50 very special wooden buildings. It would have been very bad if more than just this one building had been destroyed,” said Elm in his interview with The Local on Monday afternoon. Locals have also been coming forward to describe their experiences of the drama.

“It was half past five and I heard someone on the street shouting 'it is burning' and 'call 112',” Samuel Hansson, who lives about 25 metres from the attic where the fire broke out, told the TT news agency.

“I sensed the smell of smoke and saw a column of smoke in a neighbouring house. I got my wife and we left and took everything we thought we would need,” he said, adding that they had also rescued a photo from their wedding day, just in case they could not return to their home.

Bengt Larsson, who lives opposite one of the houses that burned down, told TT that the whole area now  “almost looks like a war zone”.
“It's not a pretty picture today compared to how it looked on Saturday,” he said.

Eksjö is one of Sweden's oldest wooden towns, founded in 1568, and includes 56 listed buildings.

Firefighters said on Monday that all of the buildings destroyed in the fire were built in the 1600s.

“We have a unique and very old town with very old buildings…for the people who live in the area they have lost their homes. But it is also sad for everyone because the town has lost some history,” Elm told The Local.

Investigations into the cause of the fire are ongoing.