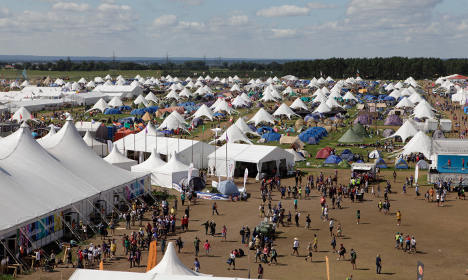 The World Scout Jamboree when it was held in Kristianstad in Sweden four years ago. Photo: Drago Prvulovic/SCANPIX

Some 33,000 teenagers from across the globe, including around 1,900 from Sweden, returned home last week after attending the 12-day World Scout Jamboree in Kirara-hama, Japan.

But after three of them came down with suspected cases of meningitis – plus another two confirmed cases among British scouts in Scotland – Sweden's Public Health Agency (Folkhälsomyndigheten) on Monday urged all who had travelled to the camp to seek medical care.

“You should receive preventive treatment if you have been to the camp, even if you don't feel unwell at all, just to be on the safe side, and without waiting for test results,” said Anders Wallensten, assistant state epidemiologist at the Public Health Agency, said in a statement.

“The risk of contracting it is very slim, but on the other hand the disease can develop rapidly,” he added.

The World Scout Jamboree is an international scouting camp which usually attracts tens of thousands of troops aged between 14 and 17.

The event drew more than 40,000 scouts from more than 140 countries when it was held in Kristianstad in southern Sweden in 2011.

A member of the Swedish scouting association told the TT newswire on Monday afternoon that they had not been given any information about the disease while in Japan.

“I heard through the grapevine that a number of Scots had been affected. But we did not get any information about any kind of illness at the camp,” said Erik Lunner, who has been travelling through Japan since the Jamboree ended.

“It would have been good had we been given more information. But I still think the probability that I've developed it is fairly low. But I have contacted the hospital and will go there as soon as I get home,” he said.

One of the Swedish youngsters was being treated for a “very probable” case of meningitis, according to the agency. The other two were being examined on Monday afternoon. Two of them were being treated in hospital in Stockholm.

“I cannot comment on individual cases other than to say that they are being treated in hospital, which in itself means it is serious. This illness often lead to people getting very, very sick,” Micael Widerström, a doctor who works with contagious diseases in Stockholm, told TT.

Meningitis is a relatively rare, but serious, illness. Symptoms include fever, neck stiffness, headache, vomiting and drowsiness. However, the risk of contracting the illness after having contact with someone with meningitis is low.