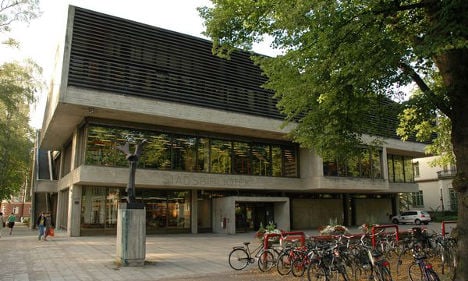 Police said on Monday night that the man was being held on suspicion of attempted murder and that they had found no connection between him and his three victims.

In an interview with Sweden's Aftonbladet tabloid, the suspect's mother said that her son had a history of mental illness and had previously spent four weeks on a psychiatric ward.

The stabbings took place just after 11.30am with witnesses saying a man who appeared to be drunk or on drugs stabbed his first victim, a man, in the back outside the city library. He then ran off to stab two women moments later, one of whom is understood to be an EU migrant who had been begging on the street.

A member of the public then overpowered the attacker and held him until police arrived and arrested him.

“When I arrived on the scene, people were sitting down and crying. There was blood on the ground. Then I saw a woman who was bleeding quite heavily. The victims were about 50 metres apart,” a witness told Sweden’s Expressen newspaper.

The victims were taken to Vrinnevi hospital. The man was given emergency surgery, while the older woman, who is thought to be in her 40s, had only minor injuries and was discharged on Monday afternoon. The second woman, who is in her 20s, was transferred to another hospital in Östergötland.

Police said that the 24-year-old man they were holding was previously known to officers for petty crimes.

The attack in Norrköping, around 150km south of Stockholm, took place exactly a week after a man and a woman were stabbed to death inside an Ikea store in Västerås, north west of the Swedish capital. Officers have not linked the two events.

A press conference is expected at 1pm.