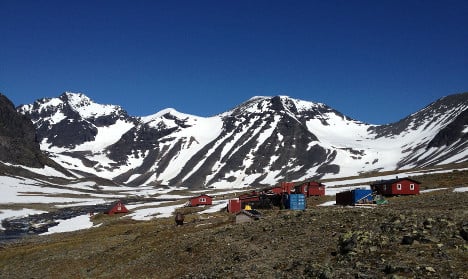 The sun is finally shining on vast swaths of Sweden after a pitiful start to the summer. Over the weekend it was 26 degrees in Halmstad, 22 in Stockholm and 20 in Umeå.

But 2015 in Tarfala in Norrbotten has seen winter, spring and then autumn. Summer simply did not turn up this year at this mountainous Lapland research station owned by Stockholm University.

The meteorological definition of autumn is when the average daily temperature is between zero and ten degrees for five days in a row, as has happened in Tarfala and also in Stekenjokk in Västerbotten.

“Two days ago there was fresh snow on the highest peaks. There is more snow than there has been for a long time.” Erik Holmlund, from the station, told Swedish news agency, TT.

“It is rare for places to skip a season in Sweden. When it does happen, it’s usually in the mountains,” according to meteorologist Alexandra Ohlsson at Swedish weather service, SMHI.

In contrast to 2014, when there was a huge heatwave, Sweden has endured weeks of rain and thunderstorms this summer, resulting in a much wetter July than normal, following the wettest May in decades.
The hottest day of the year was at the start of July, with the Swedish weather agency issuing a shortlived weather warning, calling on people to drink extra water and be on the lookout for forest fires.