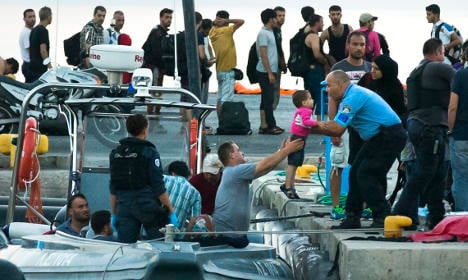 Migrants arriving in Greece earlier this month. Photo: Alexander Zemlianichenko/TT
In a high-profile interview with German newspaper Die Welt, Antonio Guterres, the UN's High Commissioner for Refugees called on Tuesday for other EU nations to play a greater role in helping asylum seekers who travel to Europe.
“It's not sustainable in the long term that just two countries with capable asylum structures, Germany and Sweden, take up the majority of refugees,” he said.
“All EU states have the moral duty to welcome them [asylum seekers] and they have a clear legal duty to protect them.”
Earlier this year Guterres championed efforts by the European Commission to force EU member states to take in a set quota of refugees arriving in Italy and Greece, a strategy which the 28-member bloc has since struggled to implement.
While asylum seekers generally enter Europe through Greece and Italy, nearly half of all asylum requests in 2014 were presented in Germany and Sweden, a sign of the continent's lopsided distribution.
Guterres' latest effort to rally other European countries comes days after German Chancellor Angela Merkel made global headlines for suggesting that immigration could become a greater challenge for the European Union than the Greek debt crisis.
“The issue of asylum could be the next major European project, in which we show whether we are really able to take joint action,” she told ZDF public television on Sunday.
READ ALSO: Merkel: Migrants are a bigger challenge than Greece
Following rising numbers of asylum applications from eastern European countries including Albania, Bosnia, Bulgaria and Serbia, Merkel also called for the European Union to establish a list of safe countries of origin, where citizens are not generally under threat of violence or persecution.
She said she hoped this tactic would deter people from wasting their time making pointless applications, so that her country could focus on those fleeing Iraq, Syria and Afghanistan.
The number of refugees arriving in Germany was expected to reach 500,000 this year, but the Handelsblatt newspaper on Tuesday quoted government sources saying this figure could rise to 750,000.
New official figures are due to be published on Wednesday, and if that projection is confirmed, it would be a record and far more than the previous high in 1992, when Germany opened its doors to refugees fleeing the Balkans wars.
READ ALSO: The Local visits Sweden's largest asylum processing centre Asylum seekers arriving in Sweden. Photo: Maja Suslin/TT
Sweden recorded the next biggest number of asylum applications in the EU in 2014 — 13 percent, although as a proportion in relation to its population size, the country is shouldering the biggest burden in the bloc.
However there are signs that refugees are starting to shun the Nordic nation as news spreads about long waiting times and cumbersome bureaucracy in Sweden.
A report by Sweden's Migration Board (Migrationsverket) last month suggested that the number of predicted asylum seekers in 2015 would be around 74,000, compared to the 90,000 it suggested in February.
“The processing times are pretty long compared to Germany, which has a fast-track lane…in Sweden it is difficult to get housing and jobs; this affects people's choice of destination country,” Anders Danielsson, head of the Swedish Migration Board, told the TT newswire in July.